Hundreds gathered to remember a murdered Wise County girl and show support for her family. A motorcycle ride held Sunday in honor of 7-year-old Athena Strand raised more than $28,000.

AZLE, Texas - There was a purposeful gathering Sunday afternoon, as hundreds of vehicles covered the property of The Church at Azle. All delivered a clear message: Justice for Athena.

"This is about Athena," one person said.

Strand was kidnapped and murdered by a 30-year-old contracted FedEx delivery truck driver, Tanner Horner, according to the Wise County Sheriff’s Office.

"This is home, right? I’m a dad of five kids, right? All of us have packages getting delivered to our homes," said Jason Malewiski, with Servolution Network.

Horner claims he accidentally hit Athena with his truck, and then strangled her in the back of his van, according to an affidavit.

Charla Knies said the horrific story led her to organize a motorcycle and vehicle ride fundraiser for Athena’s family.

"It scares all of us as parents, grandparents," she said.

Each vehicle and motorcyclist registered for the event by donating $20.

Organizers said there were hundreds, if not more than 1,000, of vehicles/motorcycles that took part in the cruise across the community.

All proceeds will go to Athena’s family. 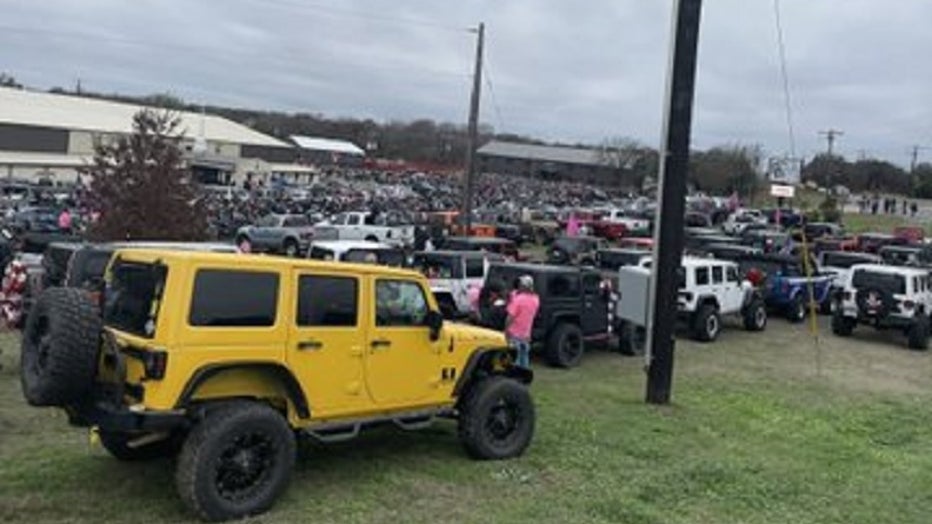 "I did this in the name of Christ, because I love Jesus Christ and I wanted everybody to show their love for the family," Knies said.

And it’s not just money people are giving to show their love.

There was a pile full of toys, including Barbie dolls, being collected.

They were gifts from riders, and they’ll be donated to local angel trees to give some children in need a special holiday.

It was all in the name of Athena.

"I know her mom was posted on social media, remember her name. Athena will live forever," Malewiski said.

Of course, everyone there wishes they didn’t have to be there, and that Athena was still alive and ready to celebrate the holidays with her family.

But as they pray for her loved ones, they’re more than willing to step in and offer any help they can give, and show Athena’s family that their community is here for them.

"Lord, we ask these things today in your beautiful and precious name, amen," one person said. "We are so amazed about the support of the community."