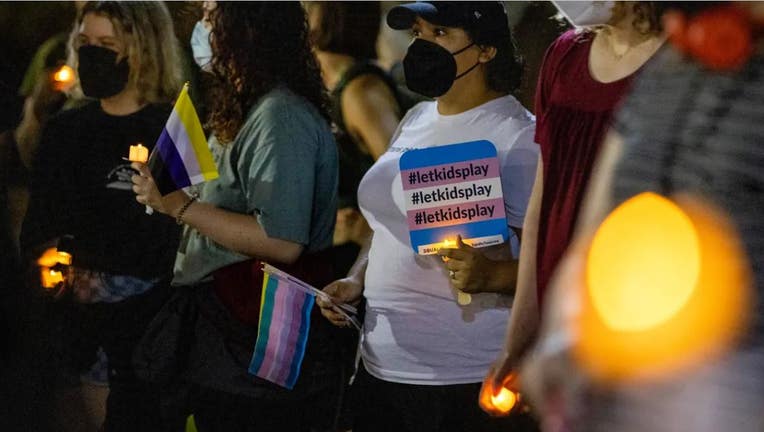 LGBTQ supporters and activists gather outside of the Governor's Mansion for a demonstration on Oct. 12, 2021. Credit: Michael Gonzalez/The Texas Tribune

Texas’ transgender student-athletes will be restricted from playing on K-12 school sports teams that align with their gender identity under a bill Gov. Greg Abbott signed into law Monday.

House Bill 25, authored by state Rep. Valoree Swanson, R-Spring, will require student-athletes who compete in interscholastic competition to play on sports teams that correspond with the sex listed on their birth certificate at or near their time of birth. It is set to go into effect Jan. 18.

The legislation goes further than current rules from the University Interscholastic League, which governs school sports in Texas. Under current UIL rules, a student’s gender is determined by their birth certificate. But UIL also accepts legally modified birth certificates in which someone may have had their sex changed to align with their gender identity.

Such legislation was a top Republican priority and among several conservative initiatives lawmakers passed and sent to Abbott for his signature this year.

On Monday, Swanson said in a statement she was "overjoyed" at Abbott’s decision to sign HB 25 into law. Swanson has argued that the bill intends to ensure fair competition in girls’ sports and uphold Title IX, a federal law that prohibits discrimination in education on the basis of sex.

"It's so very, very important that we protect everything that women have gained in the last 50 years," Swanson said during a committee hearing.

But advocates for transgender Texans have claimed the argument is not only detrimental to transgender youth but also cisgender girls and women who may not adhere strictly to societal standards.

Rebekah Bryant, whose 8-year-old daughter Sunny is transgender and testified against HB 25, last week said she felt "defeated" when the bill initially passed in the House.

"I'm feeling very defeated and very deflated right now, and I was sad to tell Sunny because we've always filtered her from the badness of all this as much as possible," Bryant said.

The Texas Senate passed bills similar to HB 25 during this year’s multiple legislative sessions, but the measures repeatedly failed to make it through the Texas House. That changed during the third special legislative session when legislation involving youth sports was sent to the House Select Committee on Constitutional Rights and Remedies, chaired by state Rep. Trent Ashby, R-Lufkin, instead of the House Public Education Committee, chaired by state Rep. Harold Dutton, D-Houston.

Ashby’s committee easily advanced HB 25 to the House floor, where Democrats introduced about 20 amendments in hopes of mitigating what they saw as harmful legislation that could have negative effects on transgender children’s mental health.

An amendment from state Rep. Donna Howard, an Austin Democrat, that ensures the legislation complies with state and federal confidentiality laws ended up in the bill’s final version.

According to the Trevor Project, a national suicide prevention and crisis intervention organization for LGBTQ youth, nine states this year have passed legislation restricting transgender youth participation in sports. In two of those states, Florida and West Virginia, legal fights have already emerged. Bryant hopes there is a successful legal challenge in Texas so that Sunny will be able to participate in UIL sports when she is older.

In a statement last week, the ACLU of Texas called HB 25 "wrong" and said it is reviewing the language of the bill and "assessing possible next steps."

Ricardo Martinez, CEO of Equality Texas, opposed the bill and said the organization’s most immediate focus is providing healing to transgender children and advocates who have returned session after session to speak out against anti-transgender legislation.

"Our organizations will also begin to shift focus to electing pro-equality lawmakers who understand our issues and prioritize representing the vast majority of Texans who firmly believe that discrimination against trans and [LGBTQ] people is wrong," Martinez said.