People are upset about an email exchange that Mayor Eric Hogue had with the mayor pro tem, who asked if someone from a faith group could lead prayer before council.

WYLIE, Texas - The mayor of Wylie got an earful Tuesday from angry residents.

People are upset about an email exchange that Mayor Eric Hogue had with the mayor pro tem, who asked if someone from a faith group could lead prayer before council.

Hogue responded, "All I ask is those leading the prayer be young men." He said he doesn't believe a woman should lead a prayer.

The mayor, who is not running for re-election, did not apologize for what he calls his opinion. But Hogue did say he did not mean to offend anyone.

Wylie mayor: ‘Only men should lead prayer at council meetings’

Several protestors, mostly women, showed up to the council meeting Tuesday to make their voices heard. One called on the mayor to resign. 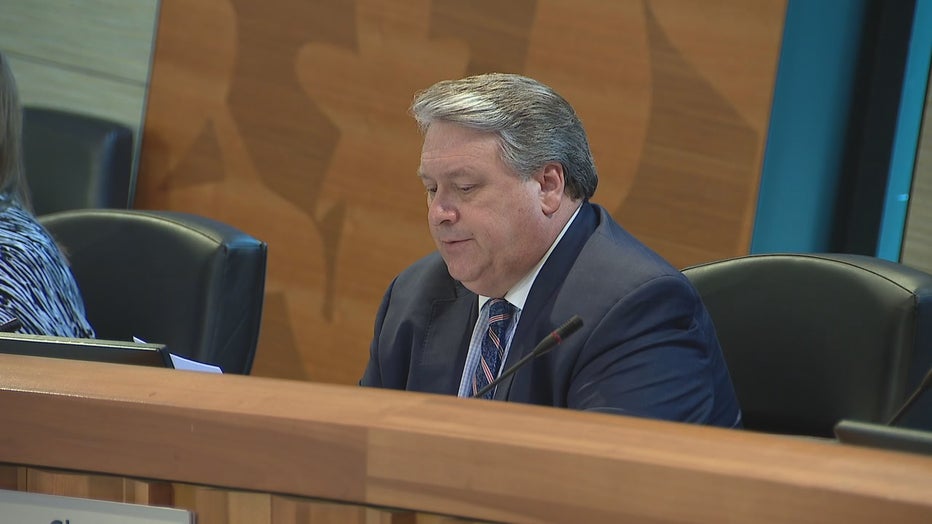 Outside Wyllie City Hall Tuesday, a group of protestors with Women Organizing Women Democrats gathered before the city council meeting to vent their anger and frustration with Mayor Hogue.

The public outcry is in response to comments Mayor Hogue made in an email exchange last week with Mayor Pro Tem Jeff Forrester.

Forrester asked the mayor what he thought about asking a couple of young men from Youth with a Mission to lead them in prayer before Tuesday’s council meeting.

Using his government account, Hogue, who is also a minister of Church of Christ, replied "all I ask is those leading in prayer be young men."

At Tuesday’s council meeting, Hogue began by reading a prepared statement responding to the criticism.

“In the email, I quoted a couple of Bible scriptures expressing why I believe the way that I do,” he said. “But in the email, I also state I understand that not everybody may agree with me. If I’m asked an opinion, my beliefs are going to factor into the decision making process. If it has offended you, please know that it was honestly not my intent.”

Hogue’s words did little to soften the blow. Several residents spoke directly to the mayor during public comment.

“It offends me on a much deeper level as a woman to have this man represent me,” one resident said.

“I was equally offended by the email I saw on social media, and I think women’s voices need to be amplified and you need to listen to their live experiences,” another resident said.

“This is a government building bought for and paid for by tax dollars from women, the same women that you discriminate against,” another resident.

One woman asked the mayor to resign.

No one spoke in support of the mayor's stance.

Protestors would like the city council and city attorney to look into the issue further.

It's worth mentioning that there were several people from Youth with a Mission, both young men and young women. One of the men gave the invocation.