Two civil rights groups joined together in a call to action in front of the Dallas Police Department.

Two civil rights groups joined together in a call to action in front of the Dallas Police Department.

Activists marched in Dallas Tuesday demanding justice for Daunte Wright, the 20-year-old killed during a traffic stop on Sunday just outside of Minneapolis.

It’s one of several protests and vigils held around the country in honor of Wright.

Just shortly before 9 p.m., the group left the Dallas Police Department gathering in the intersection of Belleview and Botham Jean Boulevard. From there, they started slowly marching down the street. 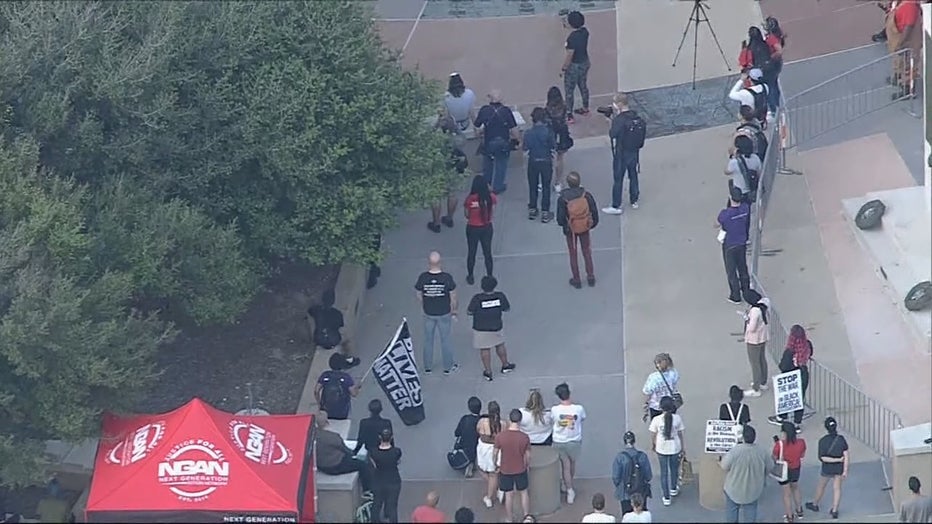 It was a fairly decent-sized group of about a few dozen people. Police kept a pretty solid distance allowing the demonstrators to march peacefully.

The group started in front of the Dallas Police Department. The organization holding the event had a tent set up. Several speakers addressed the growing crowd for about 90 minutes.

The common theme was outrage over another Black man dead at the hands of police.

Speakers renewed their calls for reducing spending on police departments and redirecting those funds back to community services.

LaSandra Scott spoke at the event. She’s the mother of Marvin Scott, who died in Collin County last month while in police custody.

"I know exactly how his mom feels. Horrible, shocked," she said. "And you wouldn’t think it would happen in Minnesota."

Scott’s family had been protesting almost daily for four weeks outside the Collin County jail in McKinney. Scott died there after his arrest in Allen last month for marijuana possession. He’d been restrained and pepper-sprayed before Collin County detention officers placed a spit hood over his head.