The city of Dallas had hoped either an appeals court or the Texas Supreme Court would allow it to remove a Confederate monument by the weekend, but no court decision has been made.

DALLAS - The city of Dallas had hoped either an appeals court or the Texas Supreme Court would allow it to remove a Confederate monument by the weekend, but no court decision has been made.

The monument, in Downtown Dallas, now has a metal fence and barriers surrounding it.

The worry is that someone may try to deface or damage it, possibly putting themselves in danger. 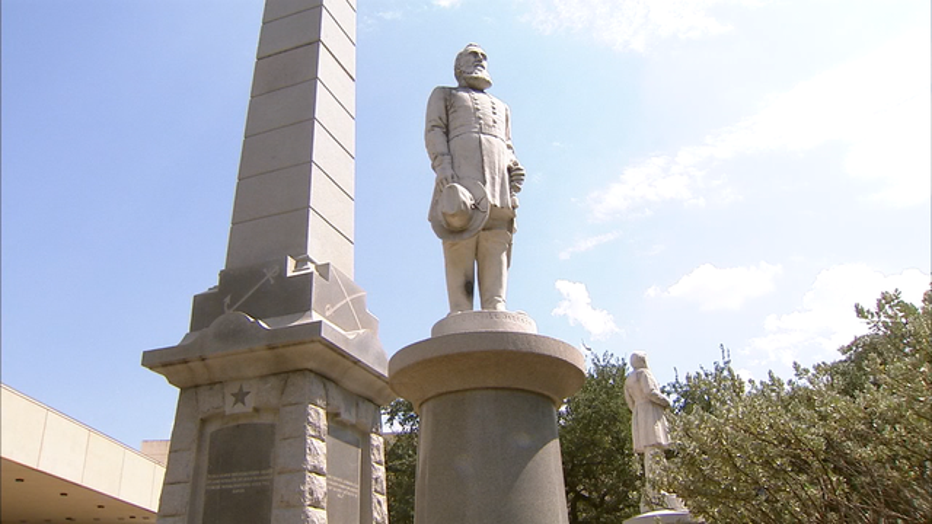 Organizers of Saturday's protest said they've moved the event from Pioneer Park, where the Confederate monument is, to Pike Park, located off Harry Hines in Dallas.

Still, the city of Dallas has taken steps to try and prevent the monument from being vandalized or torn down.

In two separate motions filed this week, the city asked for an emergency order to be able to remove the monument immediately and put into storage.

“The city is concerned there will some kind of destruction of the Confederate monument,” said Dale Carpenter, who is an SMU constitutional law professor not associated with this case.

He reviewed the motions made by the city attorney's office.

“It's asking an appeals court to reverse itself on an earlier decision it made not to permit the removal of the monument,” Carpenter said. “Just in case the 5th Circuit doesn't respond quickly enough, its asking the [Texas] Supreme Court for emergency relief.”

In the filings, the city attorney's office cited concerns protesters may try to vandalize or topple the monument, citing examples in several U.S. cities over the past week.

Last year, the Dallas Landmark Commission voted to remove the monument, but a lawsuit put that removal on hold.

Protesters at a nearby rally at Dallas City Hall felt the monument should be removed to allow for racial healing.

But they want the legal process to play out.

“You glorify something like a statue, there's a certain amount of attention that it draws and brings back thoughts of a time,” Cory Wickers said.

[REPORTER: “Do you think it should come down?”]

The attorney representing a client suing to keep the statue in place filed a response to the city's request.

Warren Norred said the city has not proved its case, adding that the referenced protest has been relocated, and thus, there is no immediate need for the 5th Circuit Court to reconsider its initial injunction, keeping the monument in place.