The city of Dallas says the lawsuit involving the Confederate monument in Pioneer Park in downtown is financially harming the city.

DALLAS - The city of Dallas says the lawsuit involving the Confederate monument in Pioneer Park in downtown is financially harming the city.

Attorneys for the city asked the judge to order the plaintiff to pay a $500,000 bond to cover the city's potential expenses.

The Confederate monument is now covered with a tarp and surrounded by fencing. In a recent court filing, the city said that not only is security there costing the city money but the cost to remove the monument may be going up as well.

Gerald Britt, a longtime advocate for removing the monument, says the costly legal battle is frustrating.

It's been two years since the Robert E. Lee monument was whisked away from an Oak Lawn park and sold to the highest bidder.

“It causes me anger,” Britt said. “I recognize the people who fought in the war were fighting to hold my people in perpetual slavery.”

Before it was covered, a Confederate soldier stood at the top of the 60-foot obelisk. It was surrounded by statues of Confederate President Jefferson Davis and his generals: Robert E. Lee, Stonewall Jackson and Albert Johnston. 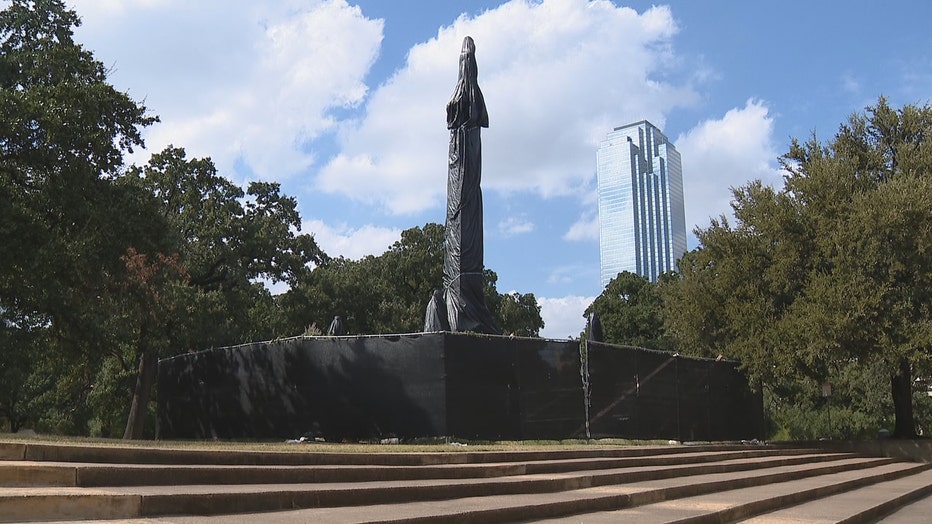 “It's a 100-year-old monument put together by people talking about Texas veterans. It's not about racism, even if people want to say it's about racism.  It's just about honoring the dead,” Norred said. “Once these monuments come down, it's over. It's very difficult to put them back the way they were.”

In July, Norred won a temporary victory against Dallas. A state court of appeals judge granted a stay on all efforts to remove or demolish the monument.

“The current lawsuit is all about procedure,” he said. “If you want to make a change like this, you have to follow rules. And they didn't follow rules.”

In a response to the stay, the city of Dallas asked the judge to order Norred's client to pay a $500,000 bond to protect the city from damages caused by the delay in removing the statue.

“It just a means to say, ‘Let’s make the plaintiffs come up with a half-million dollars, which they know we can't do,’” Norred said.

It's now up to a Texas court of appeals judge to respond to the city's request for a bond. That could take months.