LOS ANGELES - In a rare one-on-one interview, Prince Harry said he stepped back from his work as a front-line member of the royal family last year because the British press was "destroying" his mental health.

"It was stepping back rather than stepping down. It was a really difficult environment, as I think a lot of people saw," Harry told "The Late Late Show" host James Corden. "We all know what the British press can be like, and it was destroying my mental health. I was like, ‘this is toxic.’"

"So I did what any husband and what any father would do and thought, ‘I need to get my family out of here.’ But we never walked away, and as far as I’m concerned, whatever decisions are made on that side, I will never walk away," Harry added.

The appearance marked Harry’s first interview since his grandmother, Queen Elizabeth II, stripped the prince and his wife, the former actress Meghan Markle, of their remaining royal duties earlier this month.

The Queen announced her decision on Feb. 19, saying it wasn't possible for the couple to "continue with the responsibilities and duties that come with a life of public service" after they stepped away from the work of the royal family. Harry and Meghan replied by saying "service is universal" and underscoring their commitment to the U.K., a response seen by some as disrespectful to the queen.

In the mostly lighthearted segment that aired early Friday, Corden and the prince tour Southern California on an open-top bus. Corden’s interview preceded one by Oprah Winfrey, whose interview with the couple is scheduled to air on March 7.

The couple also recently announced they are expecting a second child.

When asked about Netflix’s series "The Crown," which chronicles the life of Queen Elizabeth II from the 1940s to modern times, Harry said he preferred the drama series’ depiction of royal life to the one published in the news.

"They don’t pretend to be news. It’s fictional, but it’s loosely based on the truth," Harry said. "It gives you a rough idea about what that lifestyle — what the pressures of putting duty and service above family and everything else — what can come from that. I’m way more comfortable seeing ‘The Crown’ than I am seeing the stories written about my family, my wife or myself." 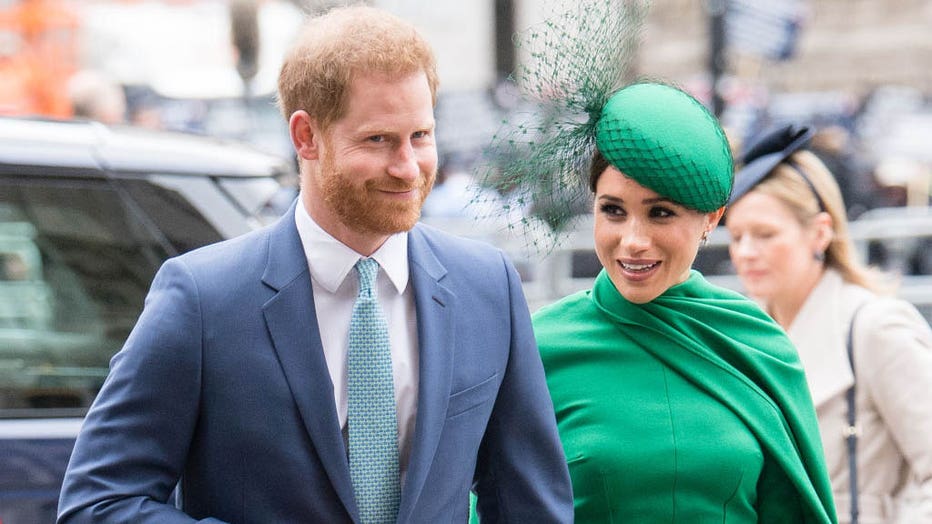 Whatever issues have divided the royals, Harry also suggested he and Meghan remain in touch with the monarch and her husband, Prince Philip. Harry told Corden that the monarch gave Harry and Meghan’s son, Archie, a waffle-maker for Christmas and that the senior royals had seen the toddler "running around" in California via Zoom.

The prince also offered a glimpse of the couple's life in the wealthy Santa Barbara County enclave of Montecito, where they generally watch the game show "Jeopardy" and Netflix programs before going to bed. Archie’s first word was "crocodile," Harry said.

At one point during the segment, they arrived outside the mansion where the opening sequence of Will Smith’s "Fresh Prince" was filmed — where the prince rapped the lyrics to the show's famous theme song.

Corden then jokingly tried to convince Harry to buy the sprawling mansion, placing a video call to Meghan to seek her support. She demurred.

Meghan then asked "Haz" how his tour of Los Angeles was going, prompting Corden to ask Harry about the nickname.

"I didn’t know we were calling you Haz now,″ Corden said.

"You’re not my wife,″ Harry responded with a shrug, as both men chuckled.

Earlier this month, a British judge ruled that a newspaper invaded the Duchess of Sussex’s privacy by publishing a personal letter to her estranged father.

Meghan sued publisher Associated Newspapers for invasion of privacy and copyright infringement over five February 2019 articles in the Mail on Sunday and on the MailOnline website that published large portions of a letter she wrote to her father after her 2018 wedding to Prince Harry.

In a major victory for Meghan in her campaign against what she sees as media intrusion, High Court judge Mark Warby ruled that the publisher had misused the duchess’s private information and infringed her copyright.

Meghan said she was grateful to the court for holding Associated Newspapers to account "for their illegal and dehumanizing practices." She said that "with this comprehensive win on both privacy and copyright, we have all won."