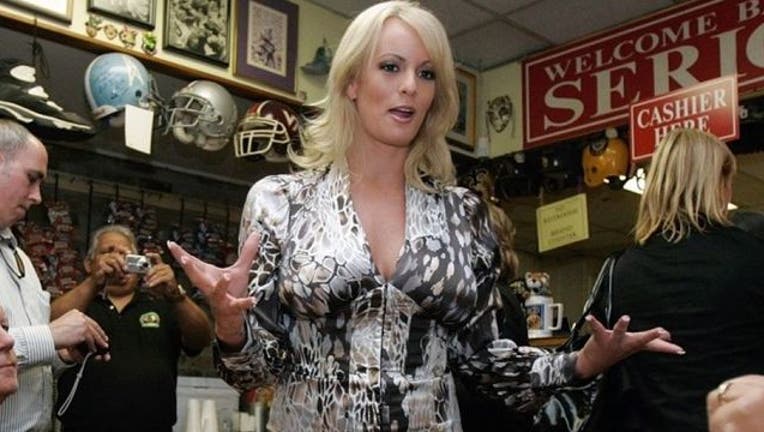 At the same time, developments in the bizarre case are fueling questions about whether such a payment could violate federal campaign finance laws.

Daniels, whose real name is Stephanie Clifford, believes that Trump's personal lawyer, Michael Cohen, invalidated a non-disclosure agreement after two news stories were published Tuesday: one in which Cohen told The New York Times he made the six-figure payment with his personal funds, and another in the Daily Beast, which reported that Cohen was shopping a book proposal that would touch on Daniels' story, said the manager, Gina Rodriguez.

"Everything is off now, and Stormy is going to tell her story," Rodriguez said.

In the years since, Clifford has claimed that she and Trump had sex once and then carried on a subsequent yearslong platonic relationship. But she has also, through a lawyer, denied the two had an affair. Trump's lawyer, Cohen, has denied there was ever an affair.

The actress first detailed her account of an alleged extramarital affair with Trump in 2011, when the celebrity website The Dirty published it but then removed the material under the threat of a lawsuit, according to the site's founder, Nik Richie.

Her story then remained largely out of public view until a month before the 2016 presidential election, when the website The Smoking Gun published an account that went mostly unnoted by major news organizations.

In January, The Wall Street Journal reported that a limited liability company in Delaware formed by Cohen made the six-figure payment to the actress to keep her from discussing the affair during the presidential campaign.

Cohen said the payment was made with his own money, and that "neither the Trump Organization nor the Trump campaign was a party to the transaction with Ms. Clifford, and neither reimbursed me for the payment, either directly or indirectly."

He was responding to inquiries from the Federal Election Commission, which is investigating an advocacy group's complaint that the October 2016 transaction violated campaign finance laws.

The case was reminiscent of the 2012 prosecution of former Democratic vice presidential nominee John Edwards, who faced six criminal charges after a pair of his wealthy friends spent nearly $1 million to support his pregnant mistress, Rielle Hunter, during his 2008 presidential run.

Jurors eventually acquitted Edwards on one charge of accepting illegal campaign contributions, but were unable to reach a verdict on the five remaining counts including conspiracy and making false statements. The case ended when prosecutors elected not to retry Edwards.

As in that case, the payment by Trump's lawyer was not reported as a campaign expenditure nor an in-kind contribution, and the origin of the money is still unclear, said Paul Ryan, a vice president at Common Cause, the group that filed the complaint.

But Bradley Smith, the Republican chairman the Federal Election Commission from 2000 to 2005, was skeptical that the payment by Cohen could pose a campaign finance issue.

"You'd have to prove that it was a coordinated expenditure, and that the reason it was done was for the benefit of the campaign," he said. If the payment was made to protect Trump's brand or avoid personal embarrassment, he said, that would likely not be a campaign problem.

At the time of the payment, which followed the release of footage from "Access Hollywood," in which Trump was recorded bragging about grabbing women's privates, Clifford was negotiating with multiple national news networks about telling her story.

A White House spokeswoman referred all questions about the payment to Cohen.

The alleged affair between the actress and Trump occurred in 2006, a year after his marriage to his third wife, Melania.

A lawyer for Clifford, Keith Davidson, has previously distributed statements on her behalf denying there was any affair.

But in a 2011 interview with the gossip magazine In Touch Weekly, the actress - who the magazine said passed a polygraph exam - said the two had sex on one occasion and she described subsequent in-person meetings, phone calls and discussions about a potential TV appearance. The AP has previously reported that In Touch held off on publishing her account after Cohen threatened to sue the publication. It published the interview last month.

In recent weeks the actress has played coy, declining to elaborate when pressed on ABC's "Jimmy Kimmel Live!"

Rodriguez said her client will soon announce how and when she will tell her story publicly. The celebrity website The Blast first reported the contention that Cohen's comments freed Clifford from her non-disclosure agreement.