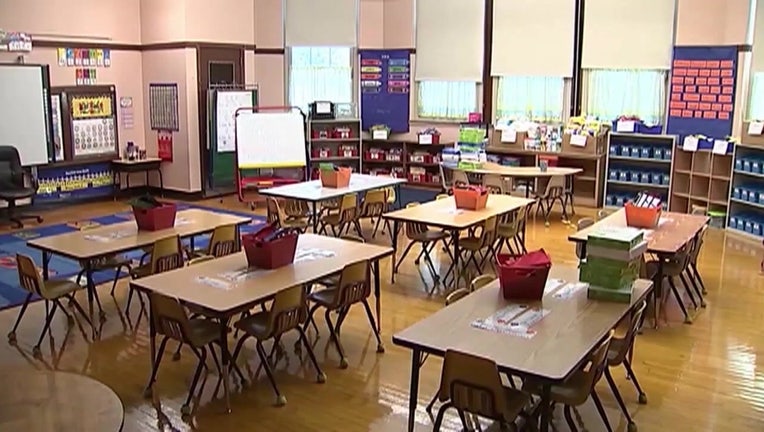 Results from a new online survey of K-12 teachers in Texas, released on Thursday, shows most "seriously considered" leaving the profession this year, a 19% increase from two years ago.

For its third annual survey on teacher satisfaction, the Charles Butt Foundation last spring sent an online questionnaire to 1,291 Texas public school teachers who were randomly selected from the Texas Education Agency’s 2020 roster of teachers in the state. All of them responded.

The Charles Butt Foundation is a nonprofit organization named after the chair and CEO of H-E-B, the largest privately held employer in Texas. The foundation’s goal is to make public education more equitable across the state through community partnerships.

Of those surveyed, 77% of them seriously considered leaving the profession in 2022, a 19% jump from the 2020 results and a 9% increase from last year. Among these teachers, 93% have taken steps to leave such as preparing resumes or conducting job interviews within the past year.

"That’s a huge, startling number," said Shari B. Albright, president of the Charles Butt Foundation. "We need for our public schools to not only survive, but thrive and flourish."

Victoria Wang, a senior research associate at the foundation, warns that when teachers are not supported, that impact is felt elsewhere at a local school.

These survey results come as Texas is amid a teacher shortage and school districts are scrambling to find creative ways to attract talent as the state and nation emerge from the global coronavirus pandemic. Some bigger districts, like Houston, have the capacity to approve significant pay increases while some rural districts have shifted to four-day weeks.

Teachers point to low pay, lack of respect from both the community and elected officials, excessive workloads and pandemic school disruptions as reasons they want to leave. In the classroom, about 98% of respondents say they have to buy their own supplies, with the median cost being about $500. The average pay for teachers has not increased between 2010 and 2019; it instead decreased from $55,433 to $54,192, according to a University of Houston report released earlier this year.

In the Charles Butt Foundation survey, 91% of Texas teachers who said they feel unfairly paid earn less than $50,000 a year.

Last spring, Gov. Greg Abbott directed the Texas Education Agency to create a task force to tackle the teacher shortage issue. The task force has met twice so far, and school leaders and teachers have shared different strategies they use to attract and retain their workforce.

In 2019, Texas lawmakers mandated raises for teachers in a $11.6 billion overhaul of public school finance. The bill also included a merit raise system designed to help rural and poorer school districts attract talent. In rare cases, the program rewards Texas’ highest-rated educators with hefty pay raises that could balloon to a six-figure salary.

Lawmakers over the last two years have put more on teacher’s plates. Some teachers have been required to take a 60- to 120-hour course on reading, known as Reading Academies, if they want to keep their jobs in 2023. And most have done it unpaid on their own time.

At the same time, teachers have felt the pressure to raise standardized test scores to pre-pandemic levels, but it hasn’t been an easy task as teachers’ workloads have increased because they have also spent more time addressing the social and emotional needs of students returning to school after the pandemic.

The survey results showed that 86% of teachers consider their non-instructional tasks and responsibilities obstacles to being a good teacher. Of those surveyed, 82% said say they lack planning time, and 81% feel pressured to teach to achieve high scores on standardized tests.

Students returning to school in the Keller Independent School District will not find the Bible or a graphic novel adaptation of Anne Frank's diary in their libraries. They're just some of the books removed as the district responds to a crackdown by Gov. Greg Abbott and fellow Republicans.

Finally, teachers feel caught in the crossfire of the state’s culture wars as school boards have centered more of their attention in some cities on book bans and removing more inclusive curriculum than on how to help teachers and students have a more productive year.

In the survey, 97% of teachers said a positive work culture and environment would keep them in the profession longer. Only 51% said they currently work in that environment. Teachers also would like greater input in school- and district-level decision-making. Only 16% of respondents said they have input into these decisions now.

"I fear an exodus, and it’s not inevitable," Albright said. "Teachers told us what we need to do."

Lauren Cook, the foundation’s senior strategist, said the future of the state and its workforce is at stake if improvements aren’t made.

"It’s really on the Legislature and those at the local decision-making level to listen," Cook said. "We can’t be at a more important turning point."

Disclosure: H-E-B and University of Houston have been financial supporters of The Texas Tribune, a nonprofit, nonpartisan news organization that is funded in part by donations from members, foundations and corporate sponsors. Financial supporters play no role in the Tribune's journalism. Find a complete list of them here.