Police say an off-duty Plano officer took action after seeing a customer at a 7-Eleven go to a car in the parking lot and get a gun following an argument the customer had with someone at the store.

PLANO, Texas - Plano police are investigating a shootout between an off-duty officer and an armed man at a convenience store.

Police say that off-duty Plano officer took action Wednesday after seeing a customer at a 7-Eleven go to a car in the parking lot and get a gun following an argument the customer had with someone at the store.

No one was hit by the bullets during the shootout, which did appear to damage at least one car.

It’s still unclear what the gunman is charged with and or what was said during the altercation inside the 7-Eleven before the man allegedly went to his car and pulled out a gun.

Plano police say the 911 call came in at 4:30 p.m. at the convenience store on Shiloh Road and 14th. The call from someone at the store was about a weapon.

Investigators did not say what was said during the argument.  Both the off-duty officer and gunman walked out of the store.

Police say the suspect allegedly went to his car and pulled out a handgun in the view of the off-duty officer.

Investigators say the off-duty officer and the suspect fired shots at each other, but it’s unclear who fired the first shot.

Police did not say if the officer announced that he was an officer.

When other officers arrived, the gunman surrendered without any incident.

Police did recover a gun in front of the store. The off-duty officer holstered his weapon.

"Both the off-duty officer and the individual left the store, and the officer observed the other male retrieve a pistol from his car. And that’s when he was confronted, and shots were fired at each other," said Plano Police Det. Jerry Minton. "We have not been given any information as far as when there was any type of identification as an officer."

Multiple shots were fired, even as far as across the street to a nearby shell gas station, which had a shattered window.

Police said there is video from the store, but the video has to be obtained by corporate for detectives to review.

A person of interest was released hours later. 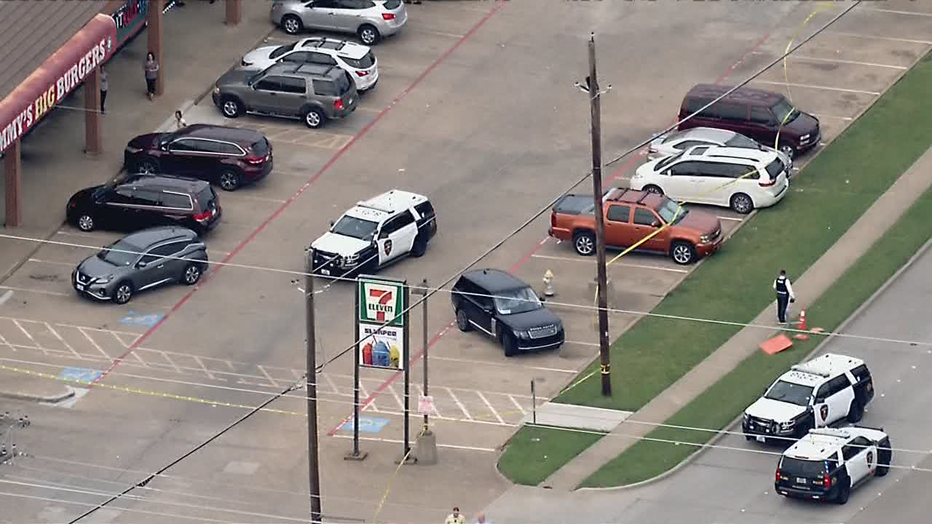