PHOENIX - Phoenix Police are investigating an incident caught on camera stemming from a stolen car investigation showing an officer punching a girl several times on Jan. 31.

Body camera footage was released less than a day later by the department, giving a view of both sides to the story.

The girl's family says she's just 13 years old. The video shows an officer hitting the girl several times, as the girl's aunt who records the video yells "she is a minor!"

This incident reportedly happened around 4:30 p.m. at an apartment complex near 61st Avenue and McDowell Road when officers were investigating a report of a stolen car being seen with several people inside.

"This was a call of an occupied stolen vehicle with several people inside of it, including the minor female in the video. At least two people, including that minor female, were arrested for charges including aggravated assault on a police officer," says Phoenix Police Sgt. Ann Justus.

Police provided an update the next day saying that the girl was not inside the stolen car but did approach the officers and refused to stay back.

On Feb. 1, the teen, Taylor Thomas, and her aunt Charlene Thomas, say she's being wrongly accused of assaulting an officer, and they want the department to be held accountable.

Being involved in the stolen car investigation, or not, the teen's family is asking why she had to be punched in the face at all. Police say Taylor was warned several times to stay back, and claim she swung at the officer.

'My heart felt like it was gonna beat out my chest'

As she starts walking away, an officer darts toward her and starts swinging, landing multiple blows. "I thought my niece was just going to be unconscious the way that the officer did my niece. I just was devastated," Charlene said.

"She told me that I was going to jail for assaulting a police officer," Taylor said. She says she doesn't know who the people involved in the stolen car investigation are at all.

"I was never in the stolen car. I was out with four kids getting them ice cream," Taylor said. At the time, Taylor and her family wanted to record what police were doing, but she doesn't understand why she was punched in the face and spent most of the night in jail.

"I had so much running through my head. My heart felt like it was gonna beat out my chest. I just felt like crap," Taylor said.

Of course, her aunt is coming to her defense.

"I’m yelling ‘she’s a minor!’ You’re gonna lock me up when I’m telling them … even when I told them she’s a minor, they didn’t stop. She still kept going when she had her on the ground. She could’ve just stopped and done anything besides keep punching her," Charlene said.

"The Phoenix Police Department is aware of a cell phone video circulating that depicts a moment in time of an event. In an effort to share the facts, we are releasing some of the body worn camera to provide more context," Sgt. Justus said in Feb. 1 email, in part.

Detailing what led up to the video being recorded, police say a caller reported to police that they were following their car that had previously been reported stolen. Officers found the car with several people inside, as previously stated.

"Four men got out of the car. As officers were taking them into custody, people began gathering around, several of them filming the officers. Other officers told onlookers they needed to stay back during the arrests," said Sgt. Justus.

25-year-old Javon Johnson allegedly punched an officer in the face, and grabbed the officer’s gun. That's when other officers rushed to help. 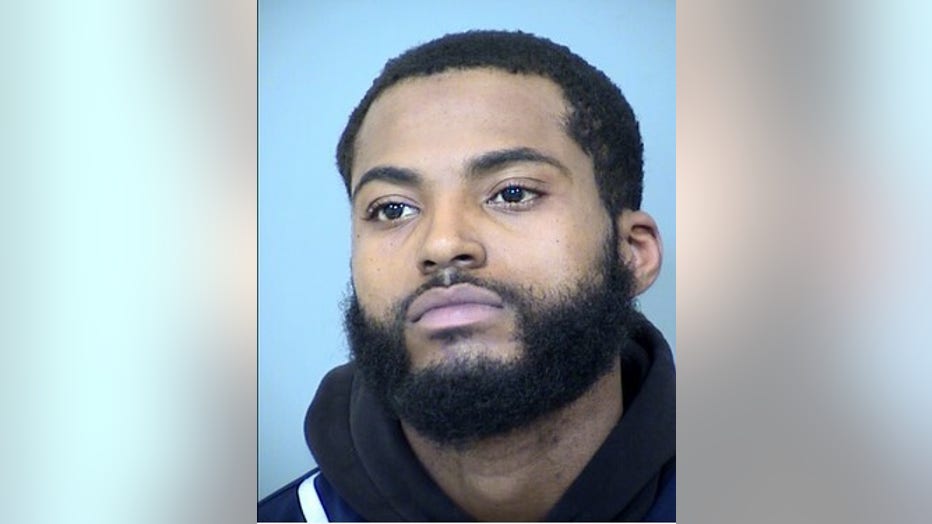 "A female, who officers later learned was 13-years-old, approached the officers as they were still detaining people. She was warned multiple times to get back. She walked in front of officers as they were trying to put one of the men in the backseat of a police car and was moved out of the way by an officer," Justus explained.

The department says the incident remains under review and investigators are continuing to gather information.

Anyone with information about the incident is asked to call Phoenix Police at 1-800-343-TIPS.

On Feb. 1, Phoenix Police officials released a number of body camera video surrounding an incident where a teenager was hit by officers at an apartment complex. We first reported on the incident on Jan. 31, after we received video of the incident, which was taken by a witness in the area.

Javon Johnson stood before a judge making his initial appearance on Feb. 2. He was one of two people arrested when police were investigating the incident.

Phoenix police say Johnson resisted arrest, grabbed an officer’s gun belt, and punched an officer when they attempted to detain him.

"Nobody human should be treated like that. It’s inhumane. Just looking for some type of peace within the community and in the police department," Johnson said. He and his family were joined by activists in front of the Phoenix Police Department on Wednesday, condemning the way police handled the situation.

Taylor and her family were also there.

"I feel like I can’t trust the Phoenix Police officers no more. After this incident, I can’t sleep, can’t do anything since the incident. I’m scared. I’m terrified," the teen said.