The COVID-19 vaccine developed by Pfizer-BioNTech appears to be effective in neutralizing a concerning coronavirus variant first detected in Brazil, according to new laboratory findings.

The worrisome variant, known as P.1, first exploded in Brazil and has been identified in more than 20 countries — including the U.S.

It has caused concern among scientists tracking the evolution of the coronavirus, as other research has suggested that P.1 may spread more easily and appears more capable of reinfecting those who have already recovered from previous bouts of COVID-19. Those findings have prompted questions of how well current vaccines can work against the variant.

The new research, published March 8 in the New England Journal of Medicine, found that the Pfizer vaccine’s ability to neutralize the P.1 variant was "roughly equivalent" to its effect on the original, less contagious strain of the coronavirus from last year.

Researchers engineered versions of the virus that contained the same mutations found in the spike protein of the P.1 variant. Blood taken from people who had received the Pfizer-BioNTech vaccine neutralized the variant in the lab, researchers said.

The team, made up of scientists from Pfizer, BioNTech and the University of Texas Medical Branch in Galveston, also found strong neutralization of another rapidly spreading variant in the U.S. and originally detected in the U.K., known as B.1.1.7.

A third concerning coronavirus variant first identified in South Africa, called B.1.351, was also looked at in the study. Researchers found that the Pfizer vaccine’s neutralization of the B.1.351 variant was "robust but lower." 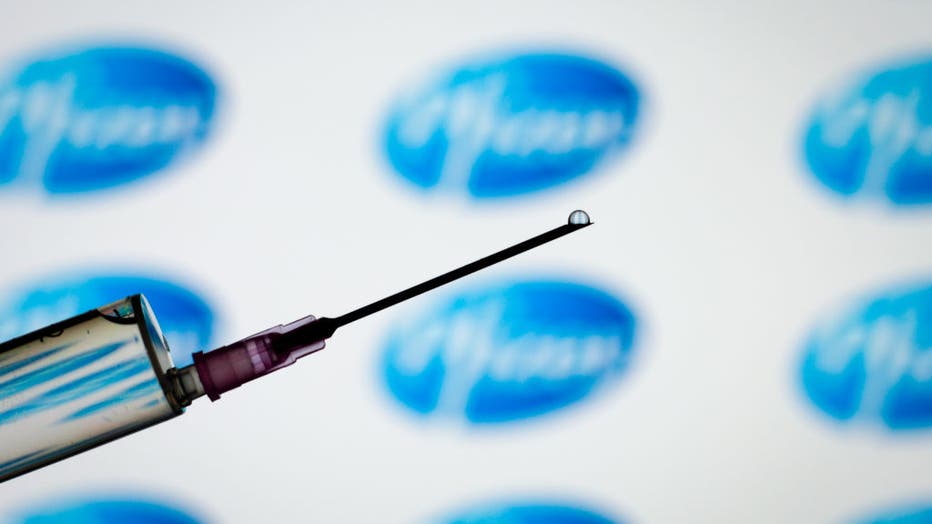 FILE - The Pfizer logo is seen with a syringe and needle in this photo illustration on March 1, 2021. (Photo by Jaap Arriens/NurPhoto via Getty Images)

"We see high neutralizing activity against all strains tested, including P.1 that is spreading so rapidly in Brazil," Carl Bergstrom, a professor of biology at the University of Washington, wrote on Twitter in response to the findings. He was not an author of the study.

"While activity is diminished against the B.1.351 strain from South Africa, it is still very impressive," Bergstrom added.

The researchers noted that results were based on a laboratory study and still needed "real-world evidence collected in regions where the SARS-CoV-2 variants are circulating."

Clinical trials last year found Pfizer’s vaccine to have a high level of efficacy (95%), conducted prior to the emergence of P.1 and other concerning variants.

A large study of the Pfizer vaccine involving about 1.2 million people supported the clinical trial findings, which indicated that two doses of the vaccine reduce symptomatic cases of COVID-19 by 94% across all age groups.

Amid the emerging variants, Pfizer-BioNTech previously said it is testing a third booster shot of its two-dose, mRNA vaccine on volunteers who participated in the Phase 1 study. Individuals will receive a third dose approximately six to 12 months after they were fully vaccinated.