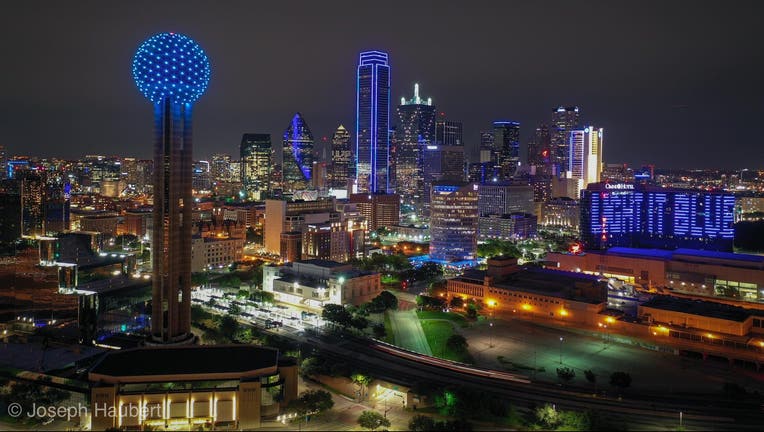 The Dallas skyline is awash in blue for the 'Light It Blue' campaign to thank medical professionals and essential workers on the front lines fighting COVID-19. (Joseph Haubert Photography)

DALLAS - A petition to display "Black Lives Matter" on the side of the Omni Dallas hotel is gaining support.

The Omni often adds messages to the Dallas skyline in support of local sports teams, campaigns and other cities in times of crisis.

The words “Light It Blue” appeared on the side of the building in April when Dallas thanked medical professionals and essential workers on the front lines fighting COVID-19. “Stay Home” and “Wash Your Hands” messages also encouraged people to follow health and safety guidelines to prevent the spread of the coronavirus.

The numbers 41.21.1 graced the side of the building when Dallas Mavericks star Dirk Nowitzki announced his retirement and a simple blue line in July honored the five Dallas officers who were killed in an ambush shooting in 2016.

“Now we face a new crisis, one that is rooted in justice, equality and meaningful change. It is no secret that, in America, black men and women are disproportionately killed at the hands of police officers,” the petition states. "The death of George Floyd is but one example in a long list of names who suffered a similar fate."

On Tuesday night, the Reunion Tower turned its lights off for only the second time in its 42-year history for #BlackOutTuesday. The movement encourages people to listen and educate themselves on how they can help the black community.

Smith and those behind the petition urge the Omni Hotel to “mirror that message by displaying those 3 simple words: Black Lives Matter.”

“In times of strife, statements such as this one can change the morale and the mood of an entire city. The Omni can make a show of solidarity and serve as a powerful vessel for change by displaying those 3 words,” the petition states.

The petition reached its goal of 1,500 signatures in just a few hours.