The historic 5-4 decision Obergefell v. Hodges in 2015, held that the right to marry is fundamental and guaranteed by the Constitution.

LOS ANGELES - On June 26, 2015, a landmark U.S. Supreme Court decision guaranteed U.S. citizens the right to marry their partner, regardless of their sex.

The decision was the culmination of many years of legal battles, and a victorious moment for advocates of marriage equality who had struggled for years against discrimination under the law.

Litigation began over the issue of marriage equality in the late 20th century with Baehr v. Lewin (1993), in which the Hawaii Supreme Court held that the failure of a clerk to issue marriage licenses to a same-sex couple was a form of sex discrimination.

The social movement culminated in the historic 5-4 decision Obergefell v. Hodges in 2015, which held that the right to marry is fundamental and guaranteed by the Constitution. The majority opinion was authored by Justice Anthony Kennedy. Kennedy had previously said he voted in favor of this position even though it did not correspond to his own Catholic religious tenets.

Kennedy said he undertook writing the monumental opinion because of his religious beliefs: “It seemed to me I couldn’t hide,” he told an interviewer. “The nature of injustice is you can’t see it in your own time,” Kennedy said. “And as I thought about it more and more, it seemed to me just wrong under the Constitution to say that over 100,000 adopted children of gay parents could not have their parents married.”

The ruling put an end to same-sex marriage bans in the 14 states that still maintained them, and provided an exclamation point for breathtaking changes in the nation’s social norms in the past decade. Nearly a year before Obergefell v. Hodges, just over one-third of the states permitted gay marriages.

Kennedy’s reading of the ruling elicited tears in the courtroom, euphoria outside and the immediate issuance of marriage licenses to same-sex couples in at least eight states.

“No union is more profound than marriage,” Kennedy’s opinion said, “for it embodies the highest ideals of love, fidelity, devotion, sacrifice and family. In forming a marital union, two people become something greater than once they were.”

Kennedy’s opinion isn’t the first to make it into a marriage ceremony. After a 2003 Massachusetts court decision made the state the first to legalize gay marriage, many couples used language from that opinion. Less frequently but still regularly, couples chose words from a 2010 ruling invalidating Proposition 8, a California ballot measure that had made same-sex marriages illegal. 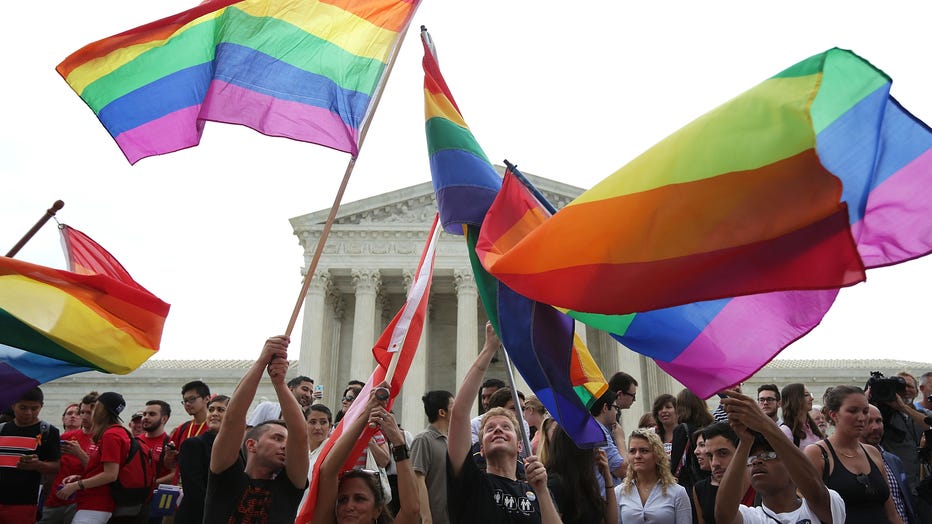 But Kennedy’s opinion, quoted in news articles and shared on Facebook, seems to have won an even wider audience, even as legal experts on both the left and right have called it short on legal reasoning and knocked it for sentimentality.

In praise of the decision, President Obama called it “justice that arrives like a thunderbolt.”

But four of the court’s justices weren’t cheering. The dissenters accused their colleagues of usurping power that belongs to the states and to voters, and short-circuiting a national debate about same-sex marriage.

“This court is not a legislature. Whether same-sex marriage is a good idea should be of no concern to us,” Chief Justice John Roberts wrote in dissent. Roberts read a summary of his dissent from the bench, the first time he has done so in nearly 10 years as chief justice.

“If you are among the many Americans — of whatever sexual orientation — who favor expanding same-sex marriage, by all means celebrate today’s decision,” Roberts said. “But do not celebrate the Constitution. It had nothing to do with it.”

Former Justice Antonin Scalia said he was not concerned so much about same-sex marriage as “this court’s threat to American democracy.” He termed the decision a “judicial putsch.” Justices Samuel Alito and Clarence Thomas also dissented.

The U.S. Conference of Catholic Bishops said it was “profoundly immoral and unjust for the government to declare that two people of the same sex can constitute a marriage.”

As Kennedy read his opinion five years ago, spectators in the courtroom wiped away tears when the import of the decision became clear. One of those in the audience was James Obergefell, the lead plaintiff in the Supreme Court fight.

Outside, Obergefell held up a photo of his late spouse, John Arthur, and said the ruling establishes that “our love is equal.” He added, “This is for you, John.”

Obama placed a congratulatory phone call to Obergefell, which he took amid a throng of reporters outside the courthouse.

Speaking a few minutes later at the White House, Obama praised the decision as an affirmation of the principle that “all Americans are created equal.”

In 2013, Obergefell and John Arthur were watching TV news about the Supreme Court striking down part of the federal anti-gay marriage law. Obergefell leaned over, kissed the man he had loved for more than two decades, and said, “Let’s get married.”

They knew they didn’t have much time. Arthur was in the final stages of Lou Gehrig’s disease.

Ohio voters had banned same-sex marriage. So within weeks, a medically equipped plane carried them to Maryland, where Arthur’s aunt waited to officiate. Arthur lay on a gurney as the couple exchanged their vows inside the plane, on the tarmac.

Less than four months later, Arthur died at age 48. Obergefell was listed on the death certificate as his surviving spouse; the couple had won a court order before Arthur’s death to make it so.