All three face at least one count of aggravated assault by a public servant, while Mabry and Williams also face two counts of deadly conduct and official oppression.

These charges are in connection with the George Floyd protests on May 30, 2020, in Downtown Dallas.

Some Downtown Dallas businesses were damaged and looted. The city of Dallas issued a curfew. Texas DPS Troopers and Texas National Guard members were brought in to help law enforcement.

Both Mabry and Williams are accused of injuring protesters using less-lethal forms of ammunition. Their attorneys have previously said the officers were defending themselves from a crowd that had turned violent against police.

Court records indicate the injured protesters were not a threat to the officers.

Williams was fired from DPD for an excessive force complaint not related to the protests.

Mabry is on administrative leave while the investigation continues.

Dallas Police Chief Eddie Garcia said the officers’ actions were not perfect, but no police department around the country responding to the protests were perfect either.

Garcia added that the officers will have their day in court, and it will be up to a jury to decide if their actions were criminal. He said he hopes jurors put themselves in the officers’ shoes. 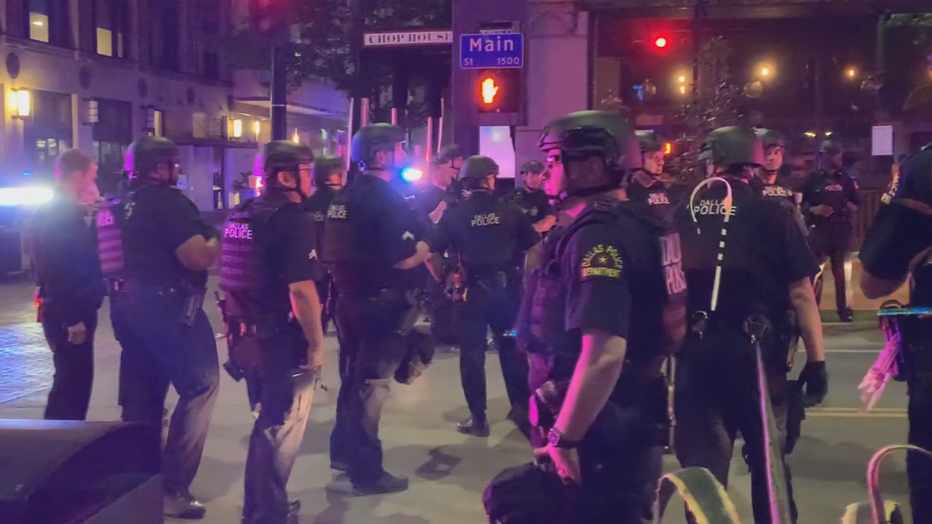 "It is not a defense, I simply just hope that someone can look at it through the lens that the officers in those chaotic situations did," he said. "Was every situation perfect, absolutely not. There is no police chief that dealt with protests that could tell you everything they did was perfect. However, I can tell you that the intent of officers was to protect this city, and I am not quite sure if there was criminal intent."

Dallas Police Association President Mike Mata said the unprecedented indictments will tie the hands of officers charged with protecting the city, some of whom worked 16 hours straight during the George Floyd protests.

"I don’t see how we get to this point. It is a complete overstep of judicial powers that DA Creuzot manipulated an event to get an indictment," he said. "The problem is as this city burns and as people are assaulted, you're going to call on these officers to come down here and defend this city. And these guys and these ladies, they're going to pause because, again, it's not about losing their job. It's about going to prison."

Creuzot had talked about the 40 millimeters used by officers as one of the main tools that caused injuries.

"That tool was used over 200 times over all those days," Mata said. "But we are going to look at these or three incidents and say officers used malice or intent to cause serious bodily harm. It’s unbelievable. It’s ridiculous."

Mata says it’s a double standard because no one has been charged with the injuries to police.

Chief Garcia and Mata admit that officers in Dallas and around the country made mistakes in response to protestors.

Brandon Sines lost his eye during the protests.

Mata says it’s one thing to bring civil lawsuits, but it’s another to say officers had criminal intent.

"If he feels there are civil recourses for him, absolutely, he has every right to do so," he said. "But there is no way you can get me to say those officers went out there to intentionally cause mane or injure people. That is not what they did out there, especially those two officers."

There was also a show of force in Garland by officers and their chief to share their displeasure over aggravated assault charges against one of their officers who responded during the Dallas George Floyd rioting.

Garland Police Chief Jeff Bryan said the men and women who stood behind him Friday wanted to support his message of disbelief. He said he is astonished by the charges coming out, and added that there's no evidence he's seen supporting the charges.

"Officer Privitt is a highly decorated officer who has honorably served our community as a police officer for over 32 years, with no disciplinary action," Bryan said. "Given the dangerous circumstances faced by our officers on the night of the riots, I have not seen evidence against Officer Privitt that rises to the level of the criminal conduct that has been alleged by the grand jury."

Bryan didn't say he regretted his decision, but the chief said he was the one who sent Privitt and others into danger to help Dallas.

Creuzot made no other statements on Friday outside of the press release.