WASHINGTON - In the most violent hour of the Jan. 6, 2021, insurrection at the U.S. Capitol, alleged conspirators in the attack who were aligned with the far-right group the Oath Keepers discussed providing security for U.S. Rep. Ronny Jackson, an Amarillo Republican, according to text messages made public in newly released court documents.

"Ronnie Jackson (TX) office inside Capitol - he needs OK help. Anyone inside?" texted an unidentified person at 3 p.m., presumably referring to the Oath Keepers as "OK."

A few minutes later, there was another call to provide help for the Texas congressman.

"Dr. Ronnie Jackson - on the move. Needs protection. If anyone inside cover him," a person texted at 3:08 p.m. and included a photo that could not be seen from the court documents.

"He has critical data to protect," the person added.

At 3:10, Stewart Rhodes, the founder and leader of the Oath Keepers, responded to the text citing Jackson and instructed a person to "Give him my cell."

Rhodes was arrested earlier this year in Little Elm, accused of conspiring with members of his organization and others to oppose the transfer of presidential power by force. ​​

A spokesperson for Jackson said in a statement that the congressman did not know the people texting about him. 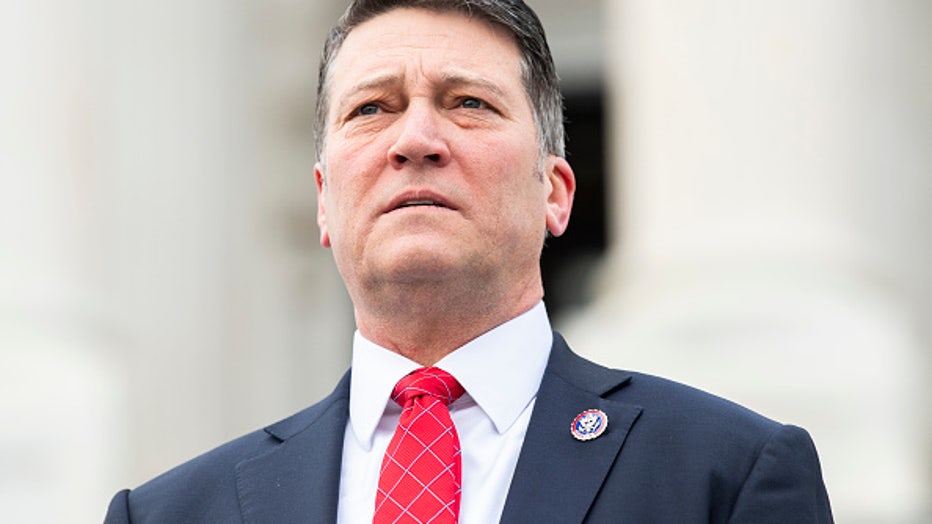 UNITED STATES - JANUARY 4: Rep. Ronny Jackson, R-Texas, is seen during a group photo with freshmen members of the House Republican Conference on the House steps of the Capitol on Monday, January 4, 2021. (Photo By Tom Williams/CQ-Roll Call, Inc via G

"Like many public figures, Rep. Jackson is frequently talked about by people he does not know," a Jackson spokesperson said in a statement. "He does not know nor has he ever spoken to the people in question. In fact, he stayed behind with Capitol Police to help defend the House Floor and was one of the last Members to be evacuated."

"The liberal media’s attempt to drag him into a ‘story’ and make him part of something he has nothing to do with is yet another example of why millions of Americans are exhausted by the relentless, biased coverage of January 6th and its continued use as a political tool," the spokesperson added.

The documents were filed as part of the case against Ed Vallejo, an Arizona man linked to the Oath Keepers who allegedly helped coordinate an arsenal of weapons and ammunition at a Virginia hotel the day before the attack. Vallejo is one of two people identified in that text chain.

The Oath Keepers claim to represent tens of thousands of present and former law enforcement officials and military veterans under the pretense of defending the U.S. Constitution. The group is, in effect, one of the largest far-right, anti-government groups that peddles in baseless conspiracy theories.

Before his time in Congress, Jackson served in the Navy and as the White House physician for Presidents Barack Obama and Trump.

At the time these texts were sent, the certification of President Joe Biden’s Electoral College vote, normally a ceremonial affair, was upended, with members of Congress fleeing the Capitol in terror. The minutes before and after these texts marked the peak moment of threat to members of Congress. The Senate chamber had been breached, as had U.S. House Speaker Nancy Pelosi’s office, where staffers were barricading themselves against intruders calling for Pelosi.

Around this time, members on the floor barricaded themselves in the chamber. Several Texas Republicans with military and law enforcement backgrounds, including Jackson, held the door shut, according to a witness account U.S. Rep. Pat Fallon, a Sherman Republican, posted on Facebook that day.

"I serve with heroes," Fallon wrote of Jackson and other Texans who stayed behind. "My Texas GOP colleagues have been my friends and now they are my heroes!!!"

Jackson was among a majority of Texas Republicans who voted to object to certifying the Electoral College votes from Pennsylvania and Arizona when the House was called back that evening after the Capitol had been secured.

On the one-year anniversary of the insurrection in January, Jackson said the individuals who breached the Capitol should be prosecuted, but he criticized the bipartisan Jan. 6 investigation committee.

"Look, I don’t think anybody was a domestic terrorist, that I’m aware of, yet," he told MyHighPlains.com. "That hasn’t been proven at all. I think that the people who entered the Capitol forcibly, the people who destroyed property, the people who broke windows and knocked down doors, they need to be held accountable, absolutely.

"But this whole pursuing this thing like it was Pearl Harbor or 9/11, which is what the Dems are pushing out today, is absolutely ridiculous," he added.