DALLAS - Charitable organizations are hoping for another record-setter for North Texas Giving Day. The day makes a real difference for so many.

Since the event began, it has raised $240 million for non-profits in the 20-county North Texas region.

Last year, 1,300 Dallas County non-profits participated. Those organizations received more than $25 million in donations from roughly 31,000 donors. And that’s not including bonus prizes or any matching funds.

Retired Dallas Mavericks legend Dirk Nowitzki and his wife were selected as honorary chairs for this year's event. 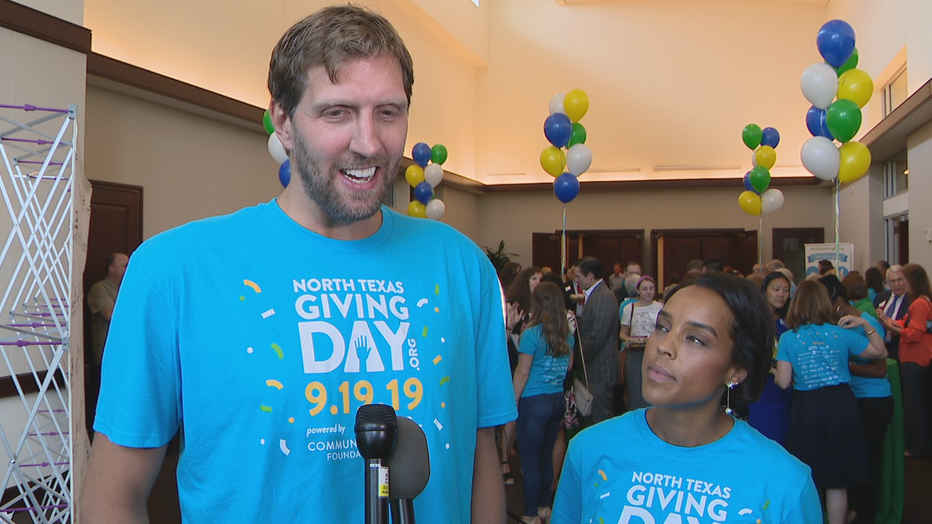 "We are in a very fortunate situation. I made money doing what I love, my hobby. And I feel like I have a responsibility to give back to the community that's shown me a lot of love and care over 21 years. And I feel like it's my obligation."

Throughout the morning Thursday, Good Day will be showcasing just a few of the charities fueled by North Texas Giving Day.

The North Texas chapter of the National Alliance on Mental Illness is celebrating North Texas Giving Day with a basketball theme. The group is giving away Dirk bobbleheads hourly. Spokesman Jeff Cavanaugh explained why the organization and donations are so important.

The Dallas United Crew teaches people to push themselves beyond the ordinary and discover what they are capable of when working as a team. It's the only inclusive rowing organization in the Southern region with programs and scholarships designed for teens, disadvantaged youth, wheelchair veterans and breast cancer survivors.

This year North Texas Giving Day has real star power with Dallas Mavs great Dirk Nowitzki and his wife, Jessica, serving as honorary chairs. That gives the Mavs ManiAACs something to cheer about.

The mission of The Senior Source has been to enhance the overall quality of life and empower all older adults in Greater Dallas to thrive. One of several programs they fund is a program for foster grandparents. Program director Triste Vasquez-White explains.

You can make a donation to any one of these charities or pick your favorite among thousands more by visiting www.NorthTexasGivingDay.org.

The giving continues through midnight.