With the Texas National Guard temporarily reassigned to help handle protests, the North Texas Food Bank is having to rely on staff alone to pack up and hand out meals to families in need.

DALLAS - With the Texas National Guard temporarily reassigned to help handle protests, the North Texas Food Bank is having to rely on staff alone to pack up and hand out meals to families in need.

While the numbers are coming down from a peak two weeks ago, it's clear employers are still cutting jobs.

The NTFB says the need for food has never been greater due to the COVID-19 pandemic. But the non-profit organization has had to temporarily halt its assembly line.

Texas National Guard troops who had been working in the warehouse for nearly two months were redeployed to assist with protests. The hope is they'll come back soon.

RELATED: National Guard on standby in Dallas to assist police amidst continued protests 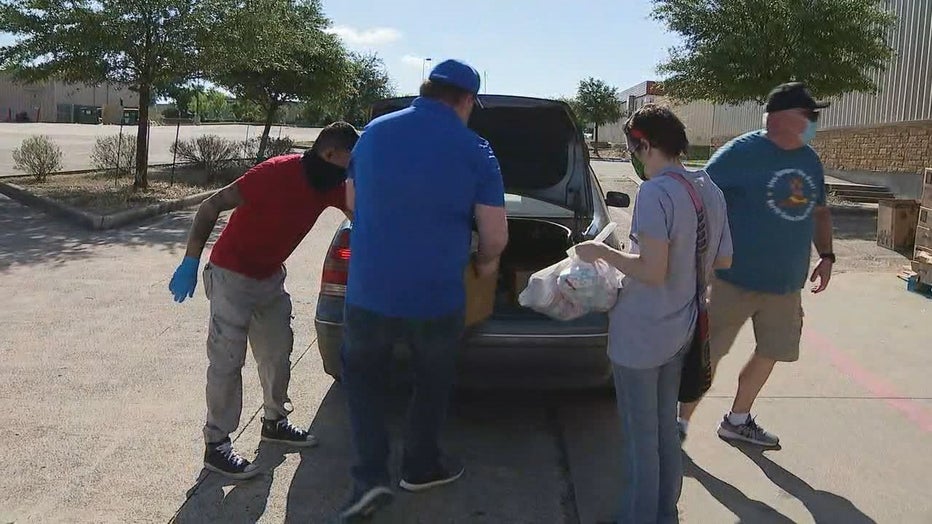 It's become a reluctant routine for many North Texans who are out of work due to the ongoing pandemic.

Zehom Combs lined up at an NTFB grocery giveaway event in Dallas Thursday. He lost his job weeks ago.

“Man, this is a great help. This is a blessing,” he said. “I appreciate every bit that I do receive.”

Some 400 families were served by the Thursday event. It’s a reminder that even as Texas businesses reopen, the economy is still struggling. The NTFB says the need is never-ending.

“In the seven years I've been a food banker, I've never seen anything last this duration,” said Valerie Hawthorne with the NTFB.

Six weeks ago, Texas National Guard troops were deployed to the food bank warehouse to assist with assembly and distribution of food. They were pulled out Sunday to assist law enforcement with growing protests.

“We've actually closed out assembly line this week as we take a pause and find out exactly what needs to be done,” Hawthorne explained.

The organization can still meet the need for now.

“Right now, we're using our staff members. So a lot of the people you're going to see out at the sites at NTFB staff and we're all pitching in during this time until the National Guard return or we can find a more permanent solution,” Hawthorne said.

On Wednesday, Texas National Guard Col. Mike Wallace told FOX 4 he hopes to have his troops back to the food bank by the end of next week. Only the governor can give the order.

“We've been communicating with them every day letting them know as soon as we're finished we're getting back in there,” Wallace said. “Some of these soldiers will go back to food banks.”

Families in need sure hope so.

“Faith is what's carrying us,” said Jeanie Fuller, an NTFB recipient. “We know eventually it's going to end. So far, God has been providing for us.”

Col. Wallace says food banks are still a top priority. It's a matter of timing and personnel.