Hundreds of National Guard troops were in North Texas Wednesday to assist police as protesting continues. They've been pulled away from other operations, including food distribution for thousands of families in need.

DALLAS - Hundreds of National Guard troops were in North Texas Wednesday to assist police as protesting continues. They've been pulled away from other operations, including food distribution for thousands of families in need.

Texas National Guard Col. Mike Wallace says all of his soldiers feel terrible about the death of George Floyd and support the first amendment right to protest peacefully. But he says they're ultimately here to protect Texans and assist law enforcement. He hopes their help isn't needed.

The Texas National Guard is working around the clock.

At the facility in Grand Prairie, troops are continually dispatched to North Texas cities in need of assistance. 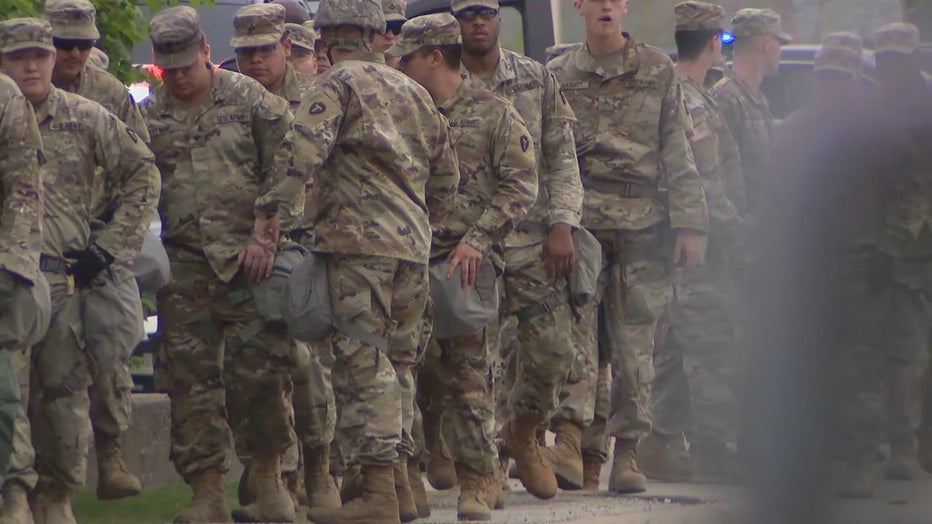 Police departments make the request to DPS who then coordinates directly with the Texas National Guard. A unit was sent to the Mid Cities Wednesday as a precaution.

“If they need crowd control or if they're starting to arrest some folks, we can assist with that,” Wallace. “But we're not making the arrest ourselves.”

Wallace is in charge of the North Texas operation. On Saturday, Gov. Greg Abbott ordered 200 troops be sent to DFW in light of growing protests in Dallas and Fort Worth. By Sunday night, there were 600.

Wallace says 60 of his men and women ended up on the Margaret Hunt Hill Bridge in Dallas Monday night when dozens of protesters marched onto the roadway. Wallace says he understands their vehicles and presence can be intimidating.

“It adds a level of seriousness and gravity to the situation,” Wallace said. “Really for the part all of the protests have been peaceful, which is great. I think it's everyone's right to do that.”

By the end of the week, Wallace expects 1,300 national guardsmen and women to be in North Texas.

“They are there for peaceful purposes to ensure that order is maintained,” Abbott said.

Appearing on FOX 4 News Wednesday, Gov. Abbott said the Texas National Guard is there to provide support during this time of unrest.

“So they want to make sure that the people who are out protesting the death of George Floyd get to do so peacefully,” Abbott said.

Col. Wallace hopes his troops can begin to stand down by the middle of next week, freeing them up to go back to prior responsibilities like assisting the North Texas Food Bank and the Tarrant Area Food Bank during the COVID-19 pandemic.

“The Guard is doing a lot right now,” he said. “They're still out there with all these mobile testing sites disinfecting nursing homes.”

As soon as this assignment is complete, many of the troops will go right back to the NTFB to continue where they left off.

Col Wallace wants to remind folks that his men and women are also Texans who care about the communities they live in.