Newly sworn-in Dallas Police Chief Eddie Garcia has an array of challenges to tackle as he takes charge of Dallas PD.

DALLAS - Newly sworn-in Dallas Police Chief Eddie Garcia has an array of challenges to tackle, and he said his biggest priorities are targeting violent crime and restoring faith between the community and police.

Garcia spent 28 years with San Jose PD, with the last handful as chief.

Though his tenure here in Dallas is a bit different situation as he’s coming from the outside to lead a department.

On his second day on the job, Garcia spoke with FOX 4, and he was asked about his plan to lead, which he said will involve getting out of the confines of his office.

"This is probably going to be one of the last weeks here where I’m going to be at main here in my office," he said. "I’m going to be having a satellite office at all seven stations here to get to know the officers, the command structure, the community members there." 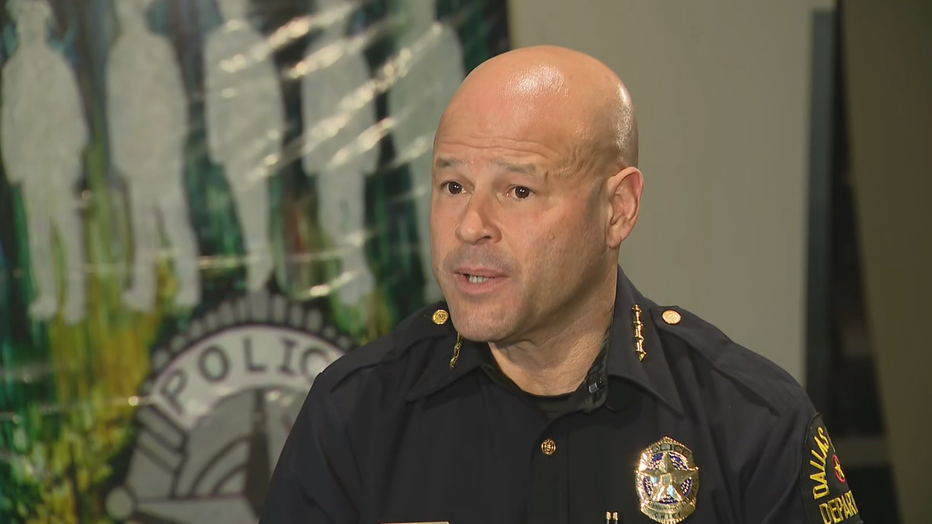 Garcia said he’ll be out on patrol Friday, and he’s been making the rounds to meet with members of his department, even before his private swearing-in this week.

Looking inward, he believes, is essential to good police work.

His top priority will be bringing down violent crime, which has been going the wrong direction in Dallas.

The 251 murders last year marked the highest number in more than 15 years.

"We’re in a hole when it comes to violent crime. We’ve got to get out of it. We certainly didn’t get into this mess overnight. We’re not going to get out of it overnight, but I think what the expectation is — or should be — is are we moving the needle?" he said.

[REPORTER: "Obviously you’re going to take some time to get a sense of things, to make changes, but when do you want to public to look and say, ‘Okay, things are working, things are going the right direction?’"]

"Well, I will say they can judge every week, every month. Because, at the end of the day, it’s not just about the numbers, it’s about the perceptions. Regardless of what the numbers say, if communities don’t feel safe, then we’re not going to get high marks there," he answered.

Chief Garcia makes history in his role, as he is the first Latino to command the department.

In an era of deep scrutiny over the relationship between police and minority communities.

Over the summer, city leaders appeared to lose faith in former Police Chief Renee Hall after police used gas and rubber bullets on those protesting the death of George Floyd on the Margaret Hunt Hill Bridge.

Chief Garcia dealt with a similar issue during protests when he was chief in San Jose, California.

He ultimately apologized for the behavior of an officer who openly antagonized protesters.

He said that a big step forward will be making sure his force looks like the community.

"We need to make sure this police department continues to do its best to resemble the community it serves," he said.

Though Garcia said he is aware that results will show whether he is successful, and the people of Dallas will expect change soon.

Garcia was, notably, in uniform on his first day as police chief. Because he came from out of state, he had to pass a state exam to officially become a peace officer in Texas.

His predecessor spent several months as a civilian in charge of the department before passing the state exam and donning a uniform.