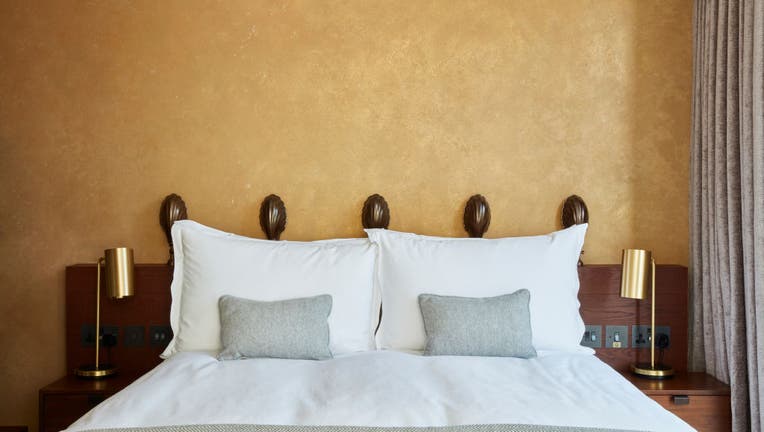 FILE - A bed is pictured in a 2018 file image taken in London, England. (Photo by: Ed Reeve/View Pictures/Universal Images Group via Getty Images)

More Americans are taking over-the-counter melatonin supplements to help them fall asleep, according to a new study published this week. But the researchers warned that the increase may also "raise safety concerns" amid a lack of data on taking it long-term and at higher doses.

Melatonin is a hormone that the brain naturally produces in response to darkness, helping with the timing of the body’s circadian rhythms and with sleep.

Melatonin supplements may help with certain conditions, such as jet lag and delayed sleep-wake phase disorder, and short-term use appears to be safe for most people, according to the National Institutes of Health. But it adds that information on the long-term safety of supplementing with melatonin is lacking.

The new research, published Feb. 1 in the Journal of the American Medical Association, found that U.S. adults took more than twice the amount of melatonin in 2018 compared to what they were taking on a regular basis a decade earlier. The team from Beijing’s Dongzhimen Hospital and Xiyuan Hospital and Minnesota’s Mayo Clinic analyzed data collected between 1999 and 2018 from the annual National Health and Nutrition Examination Survey.

"Among US adults, reported prevalence of melatonin supplement consumption significantly increased from 1999-2000 to 2017-2018 across all demographic groups," the study authors wrote. "Although it remained very low, prevalence of self-reported use of greater than 5 mg/d of melatonin also increased over time."

The recommended dosage of melatonin typically does not exceed 5 milligrams, the study said.

The rise in dosage was also found to be concerning because bottles of melatonin, which are typically sold as an over-the-counter supplement at grocery stores and pharmacies, may not contain what’s listed on the product label, the study authors said.

"These estimates may raise safety concerns, especially given that the actual content of melatonin in marketed supplements may be up to 478% higher than the labeled content," the researchers write.

In the U.S., melatonin is considered a dietary supplement — meaning it’s regulated less strictly by the Food and Drug Administration than a prescription or over-the-counter.

Researchers from the Michigan Medicine's Sleep Disorders Center made the discovery.

A separate study conducted in 2017 looked at 31 different melatonin supplements and had similar findings. Roughly 26% of the supplements also contained serotonin, a hormone that can have harmful effects even at relatively low levels, according to the NIH.

Melatonin supplements have been linked to headache, dizziness, nausea and sleepiness in various short-term studies that involved adults, surgical patients and critically ill patients, the NIH says — adding that the possible long-term side effects of melatonin use "are unclear."

It can also interact with common medications, and those taking medicine should consult with their doctor before using melatonin.

"Although melatonin is generally regarded as safe, adverse effects have been reported, and data on long-term use and high-dose use are scarce," the study authors wrote.

Rather than taking supplements like melatonin, the American Sleep Foundation recommends a number of strategies for better sleep. This includes reducing stress before bedtime, avoiding phones and other electronic devices in the leadup to bedtime, limiting caffeine, nicotine and alcohol intake, and ensuring that the room is quiet, dark and comfortably cool.