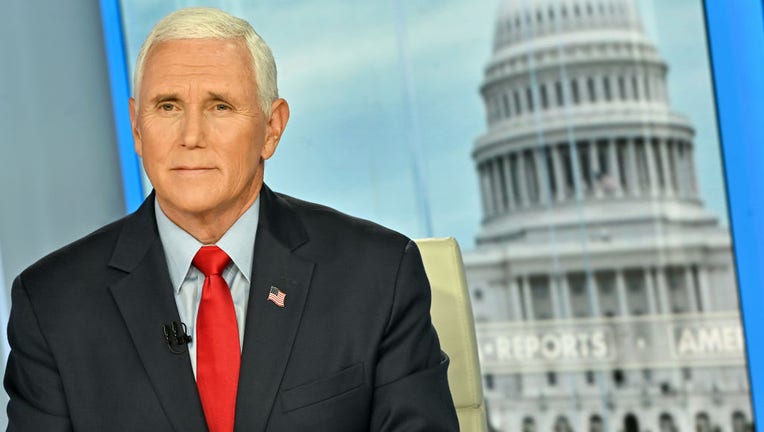 WASHINGTON - Former Vice President Mike Pence blames Donald Trump for endangering his family "and all those serving at the Capitol" on Jan. 6 in a new memoir released Tuesday.

In "So Help Me God," Pence recounts, for the first time in his own words, the Republican former president's extraordinary effort to push him to overturn the results of the 2020 election and shares his account of the day thousands of rioters stormed the Capitol, with some chanting "Hang Mike Pence."

"They had come to protest the result of the election and to prevent Congress from fulfilling its responsibility to open and count the Electoral College votes," Pence writes. "And, as I later learned, many had come looking for me."

The book, which traces Pence's life in politics — from serving as youth coordinator for a local Democratic Party to watching then-Vice President Al Gore certify his election loss days after Pence had been sworn in as a member of Congress — largely defends Trump, glossing over and whitewashing many of his most contentious episodes. "I had always been loyal to President Donald Trump," the book begins.

But Pence, who spent years refusing to publicly criticize his old boss, makes clear that Jan. 6, 2021, was a breaking point in which, he writes, Trump's "reckless words had endangered my family and all those serving at the Capitol."

"For four years, we had a close working relationship. It did not end well," Pence writes, summing up their time in the White House. Still, he adds, "we parted amicably when our service to the nation drew to a close. In the months that followed, we spoke from time to time, but when the president returned to the rhetoric that he was using before that tragic day and began to publicly criticize those of us who defended the Constitution, I decided it would be best to go our separate ways."

The book, published by Simon & Schuster, comes as Pence appears increasingly likely to run for president in 2024, a move that would put him in direct conflict with Trump, who is expected to formally launch his own reelection campaign in Florida on Tuesday night.

Pence, who in the book never directly states that Democrat Joe Biden won fairly, writes that when Trump first suggested holding a rally in Washington on Jan. 6, the day Pence was set to preside over the election's certification, he thought it was a good idea. "My first thought was that a rally that day might be useful as a way to call even more attention to the proceedings on the floor of the House and Senate," he writes.

Instead, Pence describes sitting in the Senate chamber and presiding over the certification when the Senate parliamentarian leaned over to inform him that rioters had breached the building and a member of his Secret Service detail rushing over to insist they leave. Pence refused to vacate the building and was instead ushered to a Senate loading dock, where he spent hours, surrounded by staff and family members, making calls to military and congressional leaders to coordinate the government’s response, as the president — who never bothered to check in on Pence's safety — sat cloistered, watching TV.

"All around was a blur of motion and chaos: security and police officers directing people to safety, staffers shouting and running for shelter. I could see the intensity in the eyes of the Secret Service detail; it was audible, too, in the voices of the Capitol Police. I could hear the fall of footsteps and angry chanting," Pence writes. Still, Pence insists he was "not afraid," only angry at what was unfolding.

New video of the Capitol Riot, including alleged crimes by the Proud Boys and others, shown at the congressional hearing on June 9. This version includes some censored profanity.

At 2:24 p.m., as Pence remained in hiding, Trump fired off that infamous tweet saying Pence "didn’t have the courage to do what should have been done to protect our Country and our Constitution."

"I just shook my head," Pence said he responded. "The truth was, as reckless as the president’s tweet was, I really didn’t have time for it. Rioters were ransacking the Capitol. ... The president had decided to be part of the problem. I was determined to be part of the solution. I ignored the tweet and got back to work."

Pence also describes Trump's campaign to pressure him to reject the results of the election by rejecting Electoral College votes or sending them back to the states, even though the Constitution makes clear that the vice president's role is purely ceremonial.

During one lunch on Nov. 16, 2020, Pence said he told Trump that "if the legal challenges came up short and if he was unwilling to concede, he could simply accept the results of the elections, move forward with the transition, and start a political comeback, winning the Senate runoffs in Georgia, the governor’s race in Virginia in 2021, and the House and Senate in 2022."

"That accomplished, I said, he could run for president in 2024 and win," Pence writes. "He seemed unmoved, even weary, at the prospect."

"'I don’t know, 2024 is so far off,'" Pence writes that Trump told him "before returning to the status of election challenges in various states."

At another lunch, Pence said he encouraged Trump "not to look at the election ‘as a loss — just an intermission'" and said if he "still came up short" after exhausting every legal option, Trump should "take a bow" and later run again.

"He nodded, pointed at me as if to say, ‘That’s worth considering,’ and walked into the back hallway," Pence writes. "I will always wish he had."

But as the lawsuits Trump's legal team was pushing continued to fail, Pence writes that Trump's mood darkened and he became increasingly irate. Pence says Trump berated him, telling him, "You’re too honest," and predicting that "hundreds of thousands are gonna hate your guts" and "people are gonna think you’re stupid."

Pat Cipollone: Pence should get Presidential Medal of Freedom for Jan. 6

Pat Cipollone, the former White House counsel to President Donald Trump, gave a deposition for the Jan. 6 House committee investigating the Capitol riot after months of asking him to come forward. During the testimony, Cipollone went out of his way to state how courageous he thought Vice President Mike Pence was for certifying the election, and told the committee that he felt Pence should be awarded the Presidential Medal of Freedom.

"As the days wore on, it was becoming clear that there would be a real cost to me politically when I presided over the certification of the 2020 election," Pence writes. "I always knew that I did not possess the authority to overturn the election. I knew it would be hurtful to my friend for me to participate in the certification. But my duty was clear."

After the Capitol was cleared of the rioters, Congress reconvened and Pence presided over the certification of his and Trump's loss. For several days the two men did not speak. But when they finally met, five days later, Pence said they spent more than 90 minutes together, alone.

"I told him that I had prayed for him for the past four and a half years, and I encouraged him to pray," Pence said he told Trump. "'Jesus can help you through this,' I said. ‘Call on Him.’ He didn’t say anything."

"With genuine sadness in his voice, the president then mused, ‘What if we hadn’t had the rally? What if they hadn’t gone to the Capitol?’ Then he said, ‘It’s too terrible to end like this.’"