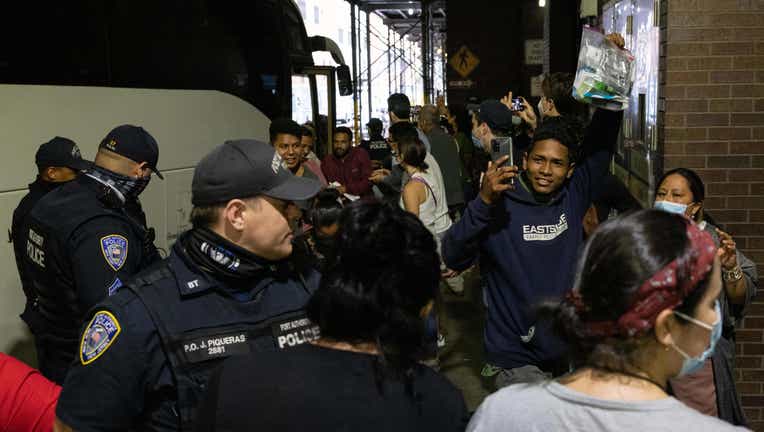 A bus carrying migrants from Texas arrives at Port Authority Bus Terminal on August 10, 2022 in New York. - Texas has sent thousands of migrants from the border state into Washington, DC, New York City, and other areas. (Photo by Yuki IWAMURA / AFP)

NEW YORK - New York City on Friday announced that it is launching a program to get hundreds of migrant children into schools, just as the "sanctuary" city is dealing with a surge in illegal immigrants being bused in from Texas.

The program, named "Project Open Arms," will involve the work of multiple city agencies to give migrant families a "broad range of resources" ahead of the start of the school year on Sept. 8.

According to the mayor's office, the project will aim to simplify the school enrollment program, provide supplies and backpacks, connect families to clinics for healthcare, offer support in native languages, and to make sure migrant children have "access to universal-social-emotional supports."

RELATED: 'Make my day': Gov. Abbott hits back at NYC mayor over threat to bus New Yorkers to Texas

The plan will also ensure that curriculum resources are "culturally and linguistically responsive," with teachers getting additional instruction "in the areas of second language acquisition and specialized instruction for diverse learners," the city announced. The plan will also see collaboration to offer legal services and transportation.

The city estimates that most migrant families are concentrated in six school districts and that at least 1,000 will enter the school system next month. It comes as Mayor Eric Adams has feuded with Texas Gov. Greg Abbott over Texas’ moves to send illegal immigrants that have come across the border into New York City.

Adams’ office says more than 6,000 asylum seekers have arrived since May. Abbott’s office has said it has been sending migrants to NYC only in recent weeks, and has sent more than 800 migrants in the last two weeks. 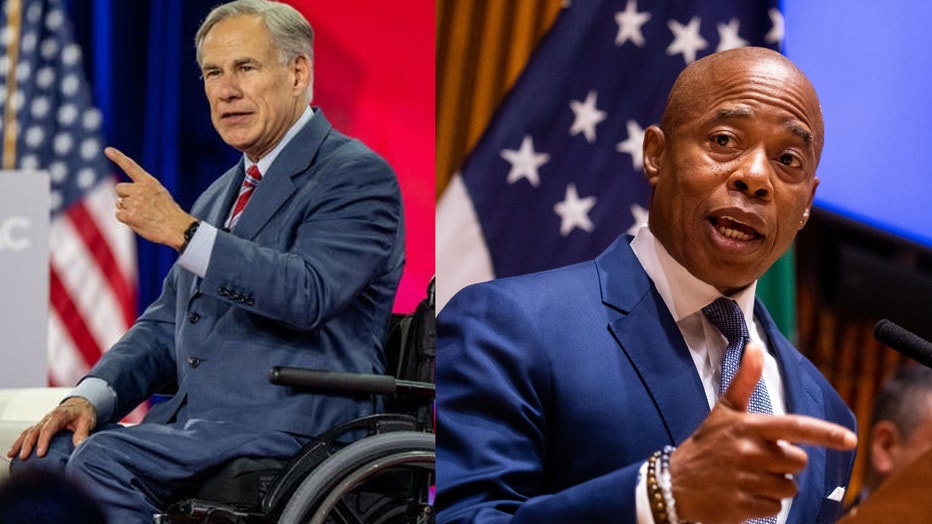 Adams has blasted Abbott for what he has called an "anti-American" policy that is cruel toward migrants, while also calling for aid from the federal government. Abbott and other officials have repeatedly noted New York City’s stance as a sanctuary city for illegal immigrants as justification for sending the buses.

On Friday, Adams stood by New York City’s policies as his office announced the new program.

"Our city has been, and will always be, a city of immigrants that welcomes newcomers with open arms," Adams said in a statement. "‘Project Open Arms’ ensures we are well-prepared to assist asylum-seekers as the school year begins and that we are offering wraparound services to students and families. With strong collaboration with our partners, both in and out of government, this plan highlights how we can lead with compassion and ‘Get Stuff Done’ for those who need it most."

State Senator Julia Salazar cited the city's sanctuary policies directly: "This is the moment of truth when it comes to living up to being a sanctuary city," she said.

Department of Education Chancellor David Banks said that New York City "has always stood with those in need of refuge and shelter, and this administration will continue that proud legacy."

"Our schools are ready and excited to welcome our newest New Yorkers to class on September 8th," he said.

Governor Greg Abbott has been critical of President Joe Biden's border policies. Now, the governor says new security initiatives include a plan to bus or fly asylum seekers to Washington, D.C. But the fine print in the directive means the migrants would not be forced to go.

Both Adams and Washington D.C. Mayor Muriel Bowser have appealed for federal help with the number of migrants, which are just a fraction of the approximately 200,000 a month hitting the southern border each month. Bowser has called for the National Guard to be deployed while Adams has requested support from FEMA.

Texas Gov. Abbott, meanwhile has accused Adams of hypocrisy for objecting to the buses given the city's sanctuary city status.

"He's also being a hypocrite because New York City is a self-declared ‘sanctuary city,’" Abbott told ABC News this week. "And so why he's ever complaining for one moment about these people being bused into a city goes against his own self-declaration of being a sanctuary city."