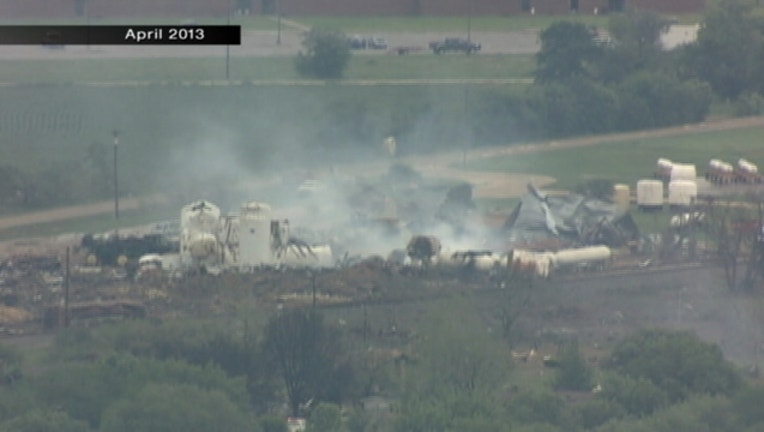 WEST, Texas - DALLAS (AP) - Work has begun on a memorial to honor the 15 people killed in 2013 after a fertilizer plant caught fire and exploded in the central Texas city of West.

Designed by former West resident Kurt Vrbas, the Fallen Heroes Memorial will feature a reflecting pool with an eternal flame, surrounded by plaques that pay tribute to the 12 first-responders and three residents who died in the April 17, 2013, blast at the West Fertilizer Co.

"I know it's been a long time, but it's something I didn't want to do haphazardly," West Mayor Tommy Muska said. "What we've come up with is going to be a beautiful monument and a beautiful remembrance for those people."

The explosion - which carved a crater 90 feet wide and 10 feet deep - also left hundreds of people injured and caused $100 million in property damage. An investigation by the Bureau of Alcohol, Tobacco, Firearms and Explosives determined that the fire that triggered the blast was set intentionally, but no arrests have been made.

Construction on the memorial began a month ago and is scheduled to conclude by the end of the summer, said memorial committee chairman Joe Pustejovsky, whose adult son, Joey, was killed while responding to the fire. It will be located in the corner of the city park, about 100 yards from where the plant erupted.

"It will have its own little place," Muska said. "It will be part of the city park but remote enough to have some peace and reflection."

Donations that poured in from across the state after the blast will cover the cost of the $300,000 project. Several Texas-based companies supplied materials and services for a free or reduced rate, Pustejovsky said. The only expenses for which the city will be responsible are maintenance and upkeep, he said.

"Joe's a family friend. He asked me to help out, and I was glad to do so," Vrbas said.

Upon completion, a memorial dedication service will be organized for the fall. The five-year remembrance ceremony is also slated to take place at the site in 2018, Muska said.

"There's always been a big interest, not only from the community, in letting it be known what those first-responders did for the town," Pustejovsky said. "In a situation like this where it's such a tragedy, where so many people rushed to the defense of the town, we don't want that to be forgotten."