BATON ROUGE, La. - Louisiana on Monday reinstated a mask mandate in all indoor locations, including schools and colleges, as the state struggles with a fast-growing fourth surge of COVID-19 driven by the delta variant and one of the nation’s lowest vaccination rates.

Democratic Gov. John Bel Edwards announced the mandate, which goes into effect on Wednesday, less than three months after he lifted a previous face covering requirement amid hopes that the virus was abating. The mandate will apply to anyone age 5 and older — both vaccinated and unvaccinated — who enters a business, a school, a church or other inside location. It also will cover any kindergartners if they are under the age of 5.

The mask requirement had particular urgency for Edwards as students start returning to some K-12 schools this week. Louisiana’s education leaders had declined to enact any masking orders across all districts, leaving it to individual school systems to determine their plans. The governor’s executive order will end the district-by-district negotiations.

Edwards’ order will last until Sept. 1, but could be extended beyond that. 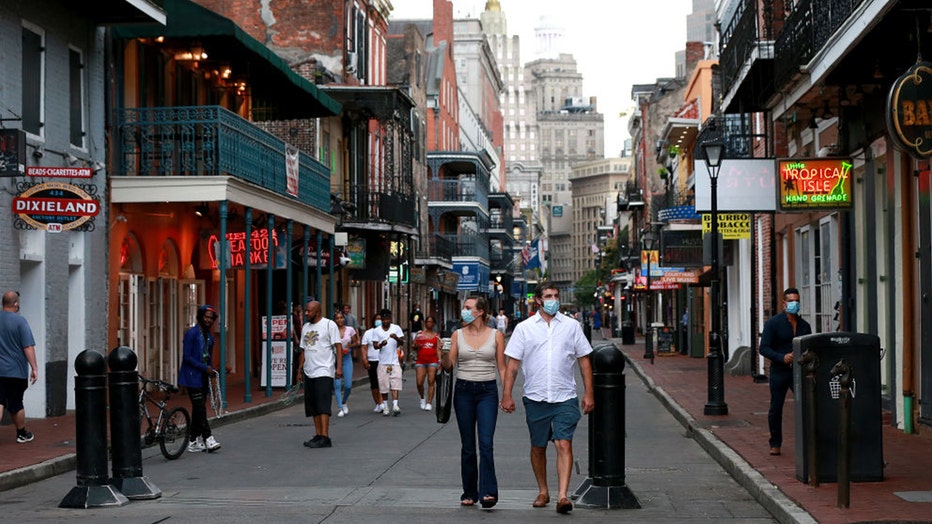 FILE - Pedestrians are seen walking along Bourbon Street in the French Quarter on July 14, 2020 in New Orleans, Louisiana.

Louisiana reported 11,109 new cases since Friday, with 27 more deaths. The number of hospitalized climbed to 1,984 — seven times the number of COVID-19 patients a month ago. The total number of deaths since the pandemic started in early 2020 surpassed 11,000 in Monday’s newest figures.

The state has one of the lowest vaccination rates in the country, although the number of people who had received at least one dose rose by more than 46,000 between Thursday and Monday, to nearly 43%. More than 1.72 million, or just under 37%, are fully vaccinated.

The governor announced the mask mandate at a briefing surrounded by hospital and business leaders who supported the decision. It came as one of Louisiana’s largest hospitals — Our Lady of the Lake Medical Center in Baton Rouge — brought in a disaster medical assistance team of nearly three dozen health care workers Monday to help the facility cope with the influx of COVID-19 patients.

"We are basically a response organization, and when the resources of state and local facilities are stressed as far as health care response, we come in and can backfill a hospital," said Stephanie Flood Thomas, a resident of Mississippi and spokesperson for the disaster medical assistance team.

The hospital said it is currently caring for 155 COVID-19 patients, one-third of them in intensive care. Our Lady of the Lake and several other medical facilities around Louisiana have delayed elective surgeries that require inpatient beds, and procedures such as cancer treatments, because of the coronavirus spike.

Thomas said she recently returned from working at a hospital in Texas, where there was a need for lab techs, nurses, respiratory therapists and a host of other areas of care.

Also Monday, officials from Edwards’ office said in a written statement that another member of the governor’s staff has tested positive for COVID-19. That staffer and five others who may have been exposed were doing well at home, in isolation, they said. Two other governor’s office staffers tested positive last week.

"The Governor’s office has a high rate of fully vaccinated staff including these staffers who were vaccinated against COVID earlier this year," the statement said. "While breakthrough cases such as these do happen, they typically do not result in serious illness."