Fighting back tears, the Tarrant County judge revealed on Tuesday that his tenure on the commissioner’s court will end after 26 years. His announcement likely means there will be a mad scramble of ambitious politicians ahead of next year's election.

FORT WORTH, Texas - Tarrant County Judge Glen Whitley announced he will not seek a fifth term in office next year.

Judge Whitley has been on the Commissioner’s Court since 1997 and has been the county judge since 2007.

The Republican also led the county’s response to the coronavirus pandemic as head of emergency management.

Fighting back tears, the Tarrant County judge revealed on Tuesday that his tenure on the commissioner’s court will end after 26 years. A standing ovation in the commission chamber quickly followed.

Citing personal reflection and his family, Whitley will not seek a fifth term as county judge. He’ll continue on the job for another 18 months until the next election. He did not rule out a possible run for another office.

"I have not ruled out anything except for I am not running for county judge," he said. 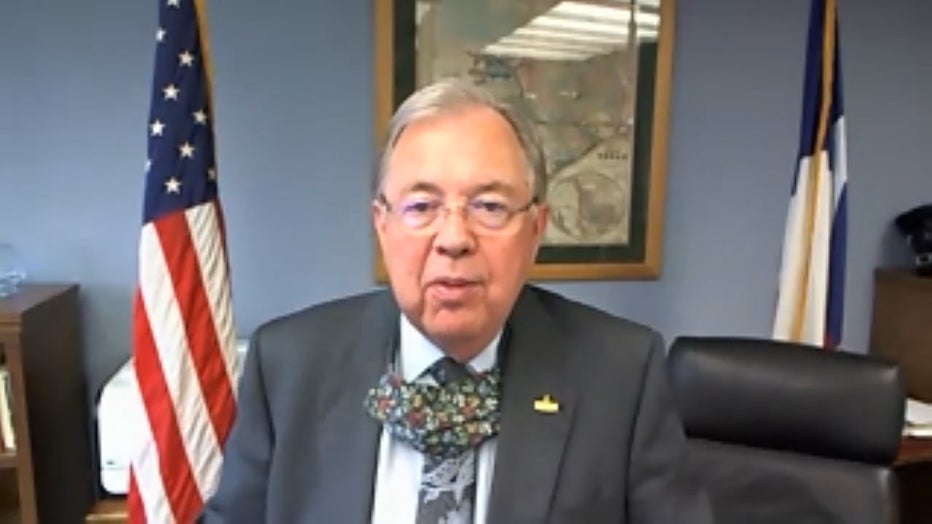 Whitley won the Precinct 3 commissioner’s seat in 1996 and was sworn in under then-Judge Tom Vandergriff. A decade later in 2007, Whitley himself took over Vandergriff's position.

"One of the things I most fondly think about is my opportunity to work with Judge Vandergriff," Whitley said. "Judge Vandergriff was always about what’s best for the people."

Whitley noted many accomplishments during his tenure. But for many, it was COVID-19 and controversies over mask orders and business restrictions that thrust him and other county judges into the spotlight.

"COVID was something I knew could be in the job description. I didn’t hope we’d ever have to dust it off and exercise it, but I know I’ve been encouraged by the collaboration that we’ve had during the last year and a half," he said. "Our priorities were to keep the hospitals open and businesses open, and I think we did both those things."

The announcement likely means there will be a mad scramble of ambitious politicians.

But speculation is building about other names.

Just minutes after Whitley’s announcement, outgoing Fort Worth Mayor Betsy Price released a statement saying in part: "I am not going to make any declaration today, but I will make my plans clear later this week."

In an interview with FOX 4 in April, Price said a run for governor was not in her future. However, without giving specifics, she said she looked forward to serving Fort Worth in some capacity.

"I’m going to let her make her announcements, but I think she’d be a great county judge," Whitley said. "She’s got county experience. She’s got the city experience."

Outgoing Fort Worth Mayor Betsy Price delivered her final remarks as mayor at city council on Tuesday. The timing is fueling speculation that she may run for the Tarrant County judge’s seat. The judge did a little speculating himself.

"I have great respect for Betsy Price," he said. "And I think that if she chooses to run, it’ll certainly be a good race to watch on the primary side. And we’ll see how it goes."

Barnes says while Price is very popular in Fort Worth, half of Tarrant County’s population lives outside of the city.

"There’s not an automatic because you’ve been the mayor of one of the two counties in the city that you’re automatically set up for the next level," he said.

The next primary election for the Tarrant County judge is in March of 2022 with the general election following in November.