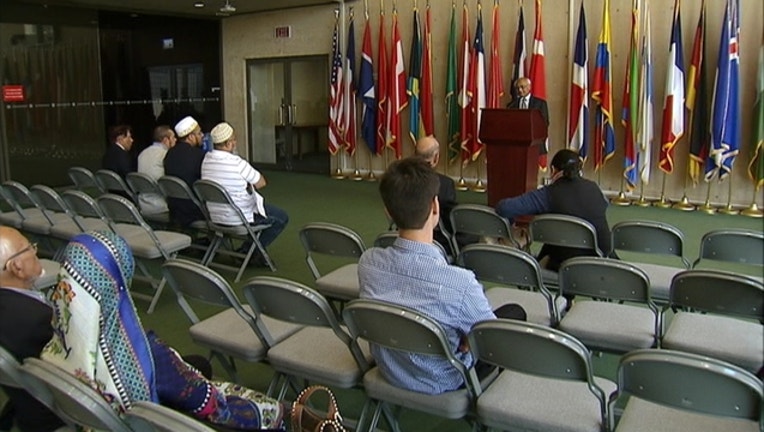 Local Muslims gathered Tuesday at Dallas City Hall and offered prayers for the LGBT community. They also addressed their growing concerns of their entire community and religion becoming political scapegoats.

“We feel that sometimes our feelings are not being heard,” said local Muslim Moazam Syed. “That we are not getting a chance to say what we want to say. We are right there with the aggrieved with the hurt parties and we always will be there.”

Speaking on national TV Tuesday morning, President Obama rebuked what he called "loose talk" and "sloppiness,” specifically from Donald Trump, who is renewing his support of a Muslim immigration ban since the Orlando shooting.

“It won’t make us more safe. It will make us less safe,” said the president. “Fueling ISIL’s notion that the west hates Muslims, making young Muslims in this country and around the world feel like no matter what they do, they're going to be under suspicion and under attack.”

“The change has to be through grassroots level,” said Mona Kafeel with the Texas Women’s Muslim Foudation. “Yes, what he says is a great start. But again, work starts ground up.”

Among the president's remarks, law professor Sahar Aziz pointed to an international audience who are also watching what's said on the campaign trail.

“When he noted that by engaging in racist rhetoric against Muslims in America, we are alienating the very allies in the middle east that we need their help in encountering ISIS,” said Aziz. “We need to be thoughtful of presidential candidates and presidents need to be thoughtful in how they address this issue.”

Aziz says the president still should acknowledge the U.S.’s relationship with certain allies who may be dictators in their own countries, saying their insecurity affects the U.S.

Republicans argued the president's remarks did little to reassure Americans concerned about more attacks in the U.S.