Protesters rallied near the Lebanese Parliament building in Beirut

World leaders and international organizations say the $300 million pledged to rebuild Lebanon’s shattered capital will come only with the reforms demanded by mourning protesters in Beirut.

BEIRUT (AP) - Lebanon’s prime minister stepped down from his job Monday in the wake of the catastrophic explosion in Beirut that has triggered public outrage, saying he has come to the conclusion that corruption in the country is “bigger than the state.”

The move risks opening the way to dragged-out negotiations over a new Cabinet amid urgent calls for reform. It follows a weekend of anti-government protests after the Aug. 4 explosion in Beirut’s port that decimated the facility and caused widespread destruction, killing at least 160 people and injuring about 6,000 others.

In a brief televised speech after three of his ministers resigned, Prime Minister Hassan Diab said he and his government were stepping down.

"May God protect Lebanon,” he said, repeating the last phrase three times. As he spoke, protesters demonstrated in the streets near parliament for a third straight day.

The moment typified Lebanon’s political dilemma. Since October, there have been mass demonstrations demanding the departure of the entire sectarian-based leadership over entrenched corruption, incompetence and mismanagement.

But the ruling oligarchy has held onto power for so long — since the end of the civil war in 1990 — that it is difficult to find a credible political figure untainted by connections to it.

Diab blamed corrupt politicians who preceded him for the “earthquake” that has hit Lebanon.

“They (the political class) should have been ashamed of themselves because their corruption is what has led to this disaster that had been hidden for seven years,” he added.

“I have discovered that corruption is bigger than the state and that the state is paralyzed by this (ruling) clique and cannot confront it or get rid of it,” said Diab, who was a professor at the American University of Beirut before he took the job.

After the catastrophe, Diab had sought to stay on for two months to organize new parliamentary elections and allow a map for reforms. But the pressure from within his own Cabinet proved to be too much. With the mass resignation, the call for early elections appears dead, so the same factions will debate on forming a new Cabinet.

Diab’s government was formed after his predecessor, Saad Hariri, stepped down in October in response to the demonstrations. It took months of bickering among the leadership factions before they settled on Diab.

His government, which was dominated by the Hezbollah militant group and its allies and seen as one-sided, was basically doomed from the start, tasked with meeting demands for reform but made up of all the factions that reformers want out.

Now the process must start again.

“I hope that the caretaking period will not be long because the country cannot take that. Lets hope a new government will be formed quickly,” Public Works Minister Michel Najjar said. “An effective government is the least we need to get out of this crisis.” 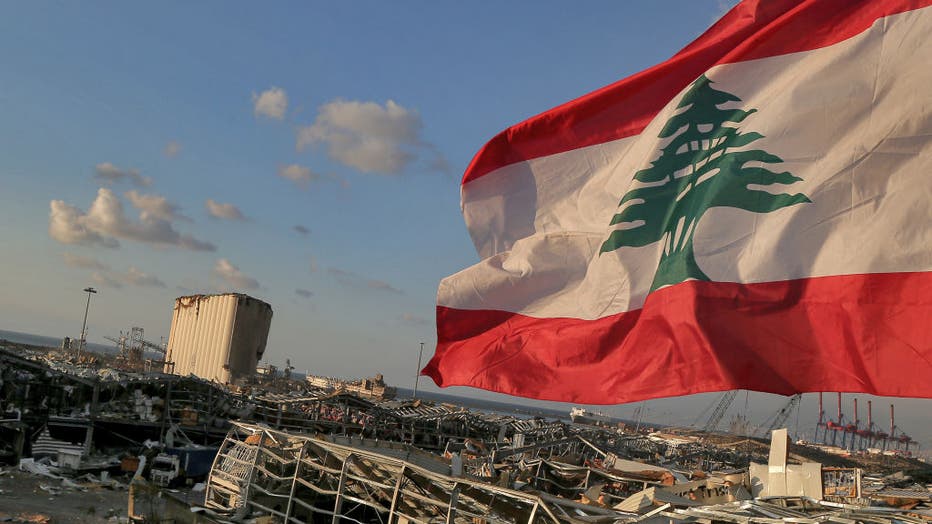 A Lebanese flag flies near the site where a massive explosion blasted the port of Beirut on the afternoon of 04 August which killed at least 158 people, wounded 6000 and displaced some 250,000 to 300,000. (Photo by Marwan Naamani/picture alliance via

The pressure from the streets — and from French President Emmanuel Macron, who visited Beirut last week after the blast — could push the political factions to put aside their differences and form a unity government. Diab's government largely excluded Hezbollah's opponents, the Eurasia Group said in an analysis, adding that the factions may now see the need to carry out greater reform.

The group said a government of independent experts could be created, although Hezbollah is a main obstacle to that since it fears that would eventually lead to the group being forced out of the political system.

The explosion is believed to have been caused by a fire that ignited a 2,750-ton stockpile of highly volatile ammonium nitrate that had been stored at the port since 2013 with few safeguards despite numerous warnings of the danger.

The result was a disaster that the Lebanese people blame squarely on their leadership’s corruption and neglect. Losses from the explosion are estimated at $10 billion to $15 billion, with nearly 300,000 people left homeless.

On Monday, a French chemical expert working at the shattered port told The Associated Press that his team is working to secure at least 20 potentially dangerous chemical containers there after finding one that was leaking.

He also said there are flammable liquids in other containers as well as batteries and other products that could increase the risk of an explosion, describing huge containers tossed around the port by the powerful blast. The expert identified himself only as Lt. Anthony in accordance with French government policy.

A judge on Monday questioned the heads of the country’s security agencies. Public Prosecutor Ghassan El Khoury questioned Maj. Gen. Tony Saliba, the head of State Security, according to state-run National News Agency. It gave no further details, but other generals are scheduled to be questioned.

State Security had compiled a report about the dangers of storing the material at the port and sent a copy to the offices of the president and prime minister on July 20. The investigation is focused on how the ammonium nitrate came to be stored at the port and why nothing was done about it.

Najjar, the public works minister, said he learned about the material’s presence 24 hours before the blast, receiving a report about the material and holding a meeting with port officials before calling its chief, Hassan Korayetem.

Alarms ring in Beirut as smoke from explosion looms overhead

Videos of thick smoke rising amid buildings have circulated on social media, as well as footage described as showing interior damage. (Credit: g.mikdashi via Storyful)

“I wrote a report in the morning the explosion happened in the evening,” Najjar said. Asked why he only learned of it the day before, Najjar said, “I don’t know. Truly I don’t know.”

On Sunday, world leaders and international organizations pledged nearly $300 million in emergency humanitarian aid to Beirut, but warned that no money for rebuilding the capital would be made available until Lebanese authorities commit themselves to the political and economic reforms demanded by the people.