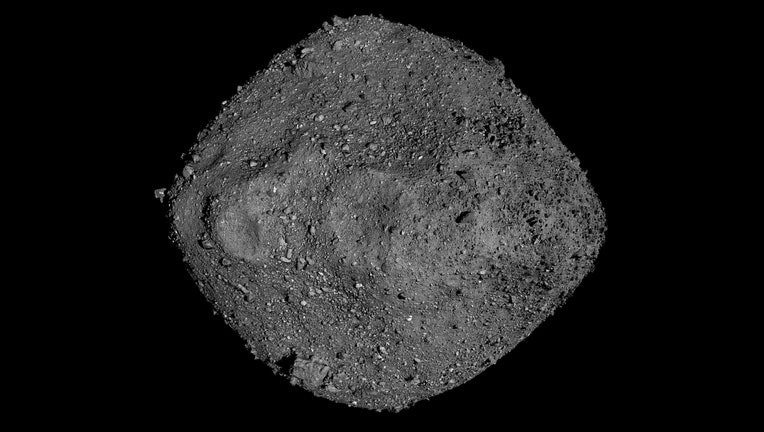 FILE - This mosaic of Bennu was created using observations made by NASA’s OSIRIS-REx spacecraft that was in close proximity to the asteroid for over two years.

Astronomers are tracking a large and "potentially hazardous" asteroid that is set to make a relatively close pass by the Earth on Tuesday.

"Near-Earth #asteroid 1994 PC1 (~1 km wide) is very well known and has been studied for decades by our #PlanetaryDefense experts," NASA tweeted last Wednesday. "Rest assured, 1994 PC1 will safely fly past our planet 1.2 million miles away next Tues., Jan. 18."

With a diameter of roughly 3,451 feet, 1994 PC1 is larger than the Burj Khalifa in Dubai and more than twice the size of the Empire State Building in New York City.

It's also fast and will be traveling at a speed of roughly 45,000 mph when it passes by Earth on Tuesday, according to NASA.

While it won't hit Earth, NASA deems 1994 PC1 a "potentially hazardous object" because of its size and distance from our planet.

If you wish to check out space rock, it's currently being tracked by NASA's "eyes on asteroid" website. You can also watch it on the Virtual Telescope Project’s livestream, which is set to start at 3:00 p.m. ET.

1994 PC1 was discovered in 1994 at the Siding Spring observatory in Australia by astronomer Robert McNaught.

After the pass on Tuesday, the asteroid won't come as close to the Earth for another two centuries, according to Universe Today, a space and astronomy news website.

Milwaukee’s Old World 3rd Street was officially changed to Dr. Martin Luther King Jr. Drive on MLK Day, Monday, Jan. 17. It's a big change from the 1980s, when the proposal created controversy and led to 3rd Street having two names.