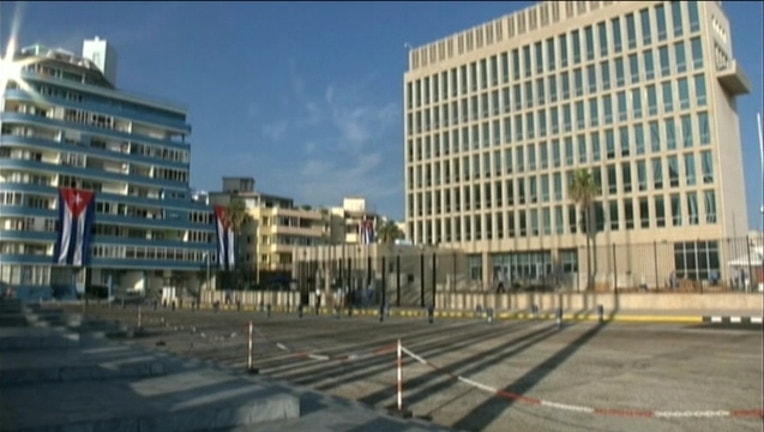 HAVANA (AP) — U.S. Marines raised the Stars and Stripes over the newly reopened American Embassy in Cuba on Friday as Secretary of State John Kerry made an unprecedented call for democratic change on the island ruled by a single party for more than five decades.

"We remain convinced the people of Cuba would be best served by a genuine democracy, where people are free to choose their leaders, express their ideas, practice their faith," Kerry said before an audience of Cuban and U.S. diplomats on the embassy grounds and millions of islanders watching and listening live.

Political change remains a taboo topic in Cuba despite a series of economic reforms and the reestablishment of diplomatic ties with the U.S. under President Raul Castro, who took over from his brother Fidel.

Hundreds of Cubans outside the embassy cheered as Kerry spoke, the United States Army Brass Quintet played "The Star-Spangled Banner" and the flag rose alongside the building overlooking the Malecon seaside promenade.

Across the country, it seemed as if virtually all of Cuba was glued to a television or listening to a live radio broadcast.

"We agree with what Kerry said," said Julio Garcia, a 51-year-old mechanic. "More democracy, elections, we hope for that to come with this diplomatic opening."

Dissidents were not invited to the embassy ceremony, avoiding tensions with Cuban officials who typically boycott events attended by the country's small political opposition. The State Department said it had limited space at what it called a government-to-government event, and invited dissidents to a separate afternoon flag-raising at the home of the embassy's chief of mission.

Giant Cuban flags hung from the balconies of nearby apartment buildings and people gathered at windows with a view of the embassy.

"I wouldn't want to miss it," Marcos Rodriguez, 28, said outside the embassy. He said he and many other Cubans hope the diplomatic thaw will bring "social and economic benefits for all Cubans."

High-ranking Cuban officials, U.S. business executives and Cuban-Americans who pushed for rapprochement gathered inside the former U.S. Interests Section, newly emblazoned with the letters "Embassy of the United States of America."

Kerry was then scheduled to meet with Cuba's foreign minister, the country's Roman Catholic archbishop and, separately, a hand-picked group of dissidents.

Soon after Kerry heads home Friday evening, the Cuban and U.S. diplomats who negotiated the embassy reopening will launch full-time into the next phase of detente: expanding economic ties between the two nations with measures like re-establishing direct flights and mail service.

The Americans also want to resolve billions of dollars in half-century-old American claims over property confiscated after the Cuban revolution. Cuba has its own claims, as noted in a newspaper column by Fidel Castro on Thursday saying the U.S. owes the island "numerous millions of dollars" for damages caused by the embargo.

"We have diplomatic relations; now we can get to the real work," said Wayne Smith, a retired U.S. diplomat who witnessed the closing of the U.S. Embassy in 1961, served in Cuba under President Jimmy Carter and returned to attend Friday's ceremony.

Obama and Raul Castro announced Dec. 17 that they would re-establish diplomatic ties 54 years after the flag was taken down from the embassy overlooking Havana's seaside boulevard, the Malecon.

Obama also said he would be moving to empower the Cuban people by loosening the U.S. trade embargo on Cuba through a series of executive actions that make it easier for American citizens to travel to the island and trade with its growing class of private business owners.

Eight months later, Havana has repeatedly demanded a complete lifting of the embargo. It has not responded to Obama's actions with measures that would allow ordinary Cubans to benefit from them, such as allowing low-cost imports and exports by Cuban entrepreneurs looking to do business with the U.S.

"I think we're ending one phase and entering another," said Robert Muse, a U.S. lawyer specializing in Cuba. "The handshakes, the fraternal regards, the raising of the flags, that'll end on Aug. 14. Then I think it's very particular conversations begin."

While Cuba has increased its highly limited Internet access since Dec. 17 in a measure U.S. officials partially attribute to the warming with Washington, ordinary Cubans are growing increasingly impatient for concrete results from the new relationship.

"I'm optimistic but cautious," said Rolando Mendez, a state worker walking outside the embassy. "We have to wait and see how events develop and if there really will be benefits for the two peoples."

The U.S. tried several times to hold discussions with Cuban officials about the details of Obama's loosening of U.S. regulations, but those meetings never happened amid the pressure to strike a deal allowing the reopening of embassies in Havana and Washington on July 20.

U.S. diplomats say that such a meeting, which could lead to a real increase in trade with the U.S., is among the top priorities of the normalization talks expected to start in earnest in coming weeks.

Kerry said in a series of interviews with Spanish-language press Wednesday that the day would move the U.S.-Cuban relationship into a series of detailed talks about topics including "law enforcement, maritime security, education, health, telecommunications."

"We will talk very directly about a sort of road map toward real, full normalization," Kerry said.