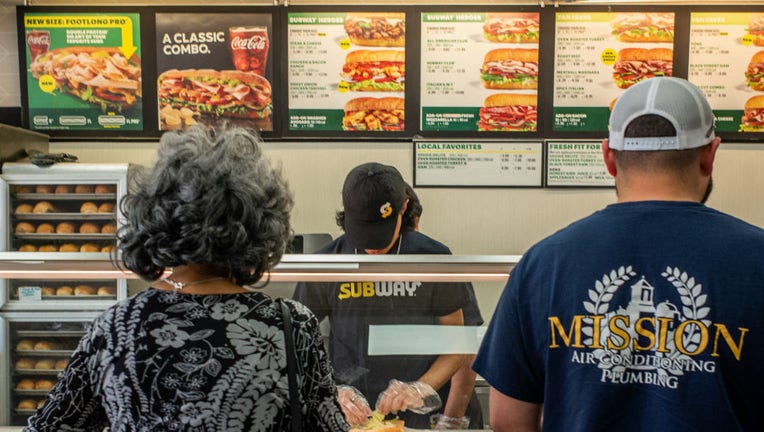 A woman who filed a lawsuit against Subway over the amount of tuna contained in its sandwiches can proceed with her case, a California judge said Monday, according to media reports.

Nilima Amin of Alameda County, California, filed a lawsuit claiming that the sandwich titan misled her and other patrons saying their sandwiches and other products contain "tuna" and "100% tuna."

NPR reported Tuesday that the woman’s lawsuit cites a marine biologist who examined 29 samples of tuna from 20 different Subway restaurants and "no detectable tuna DNA sequences whatsoever" in 19 samples.

Amin claims in her lawsuit that the tuna samples contained other types of animal DNA, including chicken and pork, the outlet added.

Subway responded to the claims in a statement provided to FOX Television Stations on Thursday:

"Subway serves 100% tuna. We are disappointed the Court felt it couldn't dismiss the plaintiffs’ reckless and improper lawsuit at this stage. However, we are confident that Subway will prevail when the Court has an opportunity to consider all the evidence."

RELATED: Subway giving away 1M free subs in honor of its 'most significant' menu change ever

Subway established a whole tuna sandwich section on its website "to set forth the facts and help clarify any misunderstandings."

According to Reuters, U.S. District Judge John Tigar said it was too early to accept Subway’s argument that the presence of non-tuna DNA may result from eggs in mayonnaise or other contacts with ingredients that Subway employees handle when making sandwiches.

Tigar dismissed the claims of Amin's fellow plaintiff who hadn't confirmed whether she had paid for a Subway tuna sandwich, according to NPR. The judge also dismissed part of Amin's suit that he described as stating a "tuna salad, sandwich, or wrap contains 100% tuna and nothing else."

Additionally, the judge gave Amin three weeks to respond to that portion of his ruling, before the case moves to the next stage, NPR reported.

Early last year, Subway received not-so-favorable media attention after two California residents sued the restaurant chain alleging that its tuna was "anything but tuna" and calling it "tuna salad" constituted fraud and false advertising. Subway responded, saying in part that the accusation was "reckless and improper."

In June 2021, A lab analysis commissioned by the New York Times found no identifiable tuna DNA in Subway’s tuna sandwich, according to the newspaper.

In its own statement, Subway fired back at the report and said it was not a "reliable way" to test processed tuna.

A New York Times reporter purchased over 60 inches of Subway tuna sandwiches from three different locations in Los Angeles. The reporter, who ordered the sandwiches without vegetables, cheese or dressing, packed the tuna meat into Ziploc bags and stuffed them in a styrofoam shipping cooler with ice packs to be tested, the report said.

The newspaper said it paid about $500 for the lab to conduct a PCR test in order to see if Subway’s tuna included one of five different tuna species. The food PCR test — which stands for polymerase chain reaction — quickly makes millions to billions of copies of a specific DNA sample, which scientists then amplify to a larger amount to study in detail.

After more than a month, the lab returned the results and said it found that "no amplifiable tuna DNA was present in the sample and so we obtained no amplification products from the DNA."

Experts also told the New York Times that when tuna is cooked, its DNA becomes denatured, which means that the tuna’s characteristic properties can become destroyed and make it difficult or impossible to identify.

In a statement to FOX Television Stations last year about the Times report, the company echoed this sentiment about the nature of DNA testing.

"A recent New York Times report indicates that DNA testing is an unreliable methodology for identifying processed tuna. This report supports and reflects the position that Subway has taken in relation to a meritless lawsuit filed in California and with respect to DNA testing as a means to identify cooked proteins. DNA testing is simply not a reliable way to identify denatured proteins, like Subway’s tuna, which was cooked before it was tested," a Subway spokesperson said in part.

"Unfortunately, various media outlets have confused the inability of DNA testing to confirm a specific protein with a determination that the protein is not present. The testing that the New York Times report references does not show that there is not tuna in Subway’s tuna. All it says is that the testing could not confirm tuna, which is what one would expect from a DNA test of denatured proteins," the statement added.

It continued: "The fact is Subway restaurants serve 100% wild-caught, cooked tuna, which is mixed with mayonnaise and used in freshly made sandwiches, wraps and salads that are served to and enjoyed by our guests."

Subway’s tuna sandwiches aren't the first product to be questioned by customers. In 2014, the company made headlines for announcing the removal of the controversial chemical azodiacarbonamide, also found in yoga mats, from its bread products.

FOX 11 Los Angeles and FOX 6 Milwaukee contributed to this story. This story was reported from Washington, D.C.