The judge presiding over the Kim Potter sentencing fought through tears as she explained why she was sentencing the former Brooklyn Center, Minnesota, police officer to less than two years in prison for killing Daunte Wright. Judge Regina Chu said Potter made an honest mistake when she thought she was reaching for her taser, and has shown complete remorse for her actions.

MINNEAPOLIS - A Minnesota judge in the sentencing of Kim Potter, a former police officer found guilty of manslaughter in the shooting death of Daunte Wright, appeared to get emotional after handing down a two-year sentence — which she called "an extremely difficult decision."

Potter was convicted in December of first- and second-degree manslaughter in the April 11 killing of Wright, a 20-year-old Black driver. Potter, who said she confused her handgun for her Taser in the shooting, was sentenced Friday and received a penalty below state guidelines after the judge found mitigating factors warranted a lesser sentence.

"This is one of the saddest cases I’ve had in my 20 years on the bench," Judge Regina Chu said during the sentencing. "On the one hand, a young man was killed. And on the other, a respected, 26-year veteran police officer made a tragic error by pulling her handgun instead of her taser."

Chu said the lesser sentence was warranted because Potter was "in the line of duty and doing her job in attempting to lawfully arrest Daunte Wright." Minnesota state sentencing guidelines called for a sentence of 86 months in prison, or just over seven years for someone who has no criminal record. Potter’s legal team asked Chu for probation.

Ultimately, Potter was sentenced to a total sentence of 24 months, with 16 months served in prison, and the remaining on supervised release. She will receive credit for 58 days served.

"Officer Kimberly Potter was trying to do the right thing. Of all the jobs in public service, police officers have the most difficult one. They must make snap decisions under tense evolving and ever-changing circumstances. They risk their lives every single day in public service. Officer Potter made a mistake that ended tragically," Chu said, pausing as she appeared to get choked up.

"She never intended to hurt anyone. Her conduct cries out for a sentence significantly below the guidelines," Chu continued, again appearing to hold back emotion.

The judge added that she recognized there would be those who disagree with the sentence.

"That I granted a significant downward departure does not in any way diminish Daunte Wright’s life. His life mattered," Chu said. She noted having received "hundreds and hundreds" of letters in support of Potter from her colleagues, family and community leaders and members — all of which were considered.

Chu said she had been "profoundly moved" by the comments of the Wright family, adding that she could "not begin to understand the grief of losing a child." 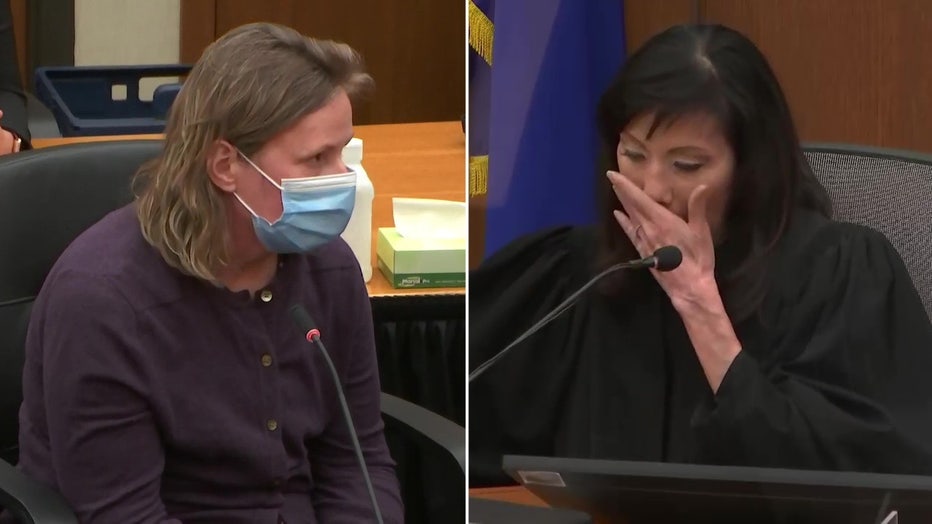 During the April 11 traffic stop, Potter, who is White, mistook her firearm for her taser and shot Wright in the chest, killing him. Brooklyn Center police officers pulled Wright over for having expired tags and hanging an air freshener on his rearview mirror.

The deadly shooting happened during the murder trial of former Minneapolis police officer Derek Chauvin for the death of George Floyd. The outrage over another police killing, fueled in part by the quick release of Potter's body camera video clearly showing her firing a gun, led to nights of unrest outside the Brooklyn Center Police Department.

Wright's mother, Katie Wright, said after the sentencing that Potter "murdered my son," adding, "Today the justice system murdered him all over again."

The state trial of Kim Potter took place from Dec. 8-23, 2021. It spanned nine days of evidence and testimony from more than 30 witnesses. Potter recalled the moments before, during and after the deadly traffic stop in an emotional testimony.

After closing statements, 12 jurors deliberated for around 26 hours before deciding to convict Potter on both counts she was charged with.

This story was reported from Cincinnati. The Associated Press and FOX 9 Minneapolis contributed.