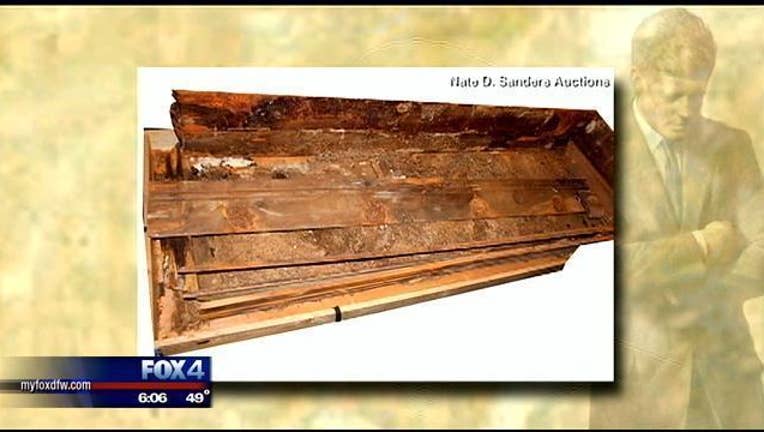 A funeral home that sold Lee Harvey Oswald's pine casket for $87,468 must return it to the accused presidential assassin's brother, a judge ruled Friday.

Robert Oswald had bought the pine bluff casket for his brother, whose body was exhumed in 1981 amid conspiracy theories that it did not contain Lee Harvey Oswald's body. After a Dallas hospital confirmed the body through dental records, it was reburied, but not in the original casket, which was too water-damaged.

Oswald's family says it thought the original casket had been thrown away, but the funeral home actually kept it in storage before selling it at auction -- along with Lee Harvey Oswald's death certificate and the embalming tools and table used in his burial -- to an anonymous buyer.

Oswald's brother, Robert, sued Baumgardner Funeral Home after it sold the coffin through an auction house in Santa Monica, California. The auction house still has the coffin, because the lawsuit had put the sale of the coffin on hold. The sale was never completed, the judgment says.

In addition to returning the casket to Robert Oswald, the funeral home must pay him $87,468 in damages, a Tarrant County judge ruled, saying its conduct was "wrongful, wanton and malicious."

It also must pay the auction house more than $10,000 in storage fees.

The funeral home also must cover the expense of transporting the coffin from California to Texas, where the family plans to destroy it, according to Oswald's attorney, Gant Grimes.

Lee Harvey Oswald, accused of assassinating President John F. Kennedy in Dallas in 1963, was fatally shot during a jail transfer two days after Kennedy's death. Although Oswald was never put on trial, authorities concluded he was the killer.

Oswald had said he didn't know the coffin still existed until he read in a Texas newspaper in December 2010 that it had been put up for sale.

The family-run funeral home's attorney, Brett Myers, maintained throughout the suit that Oswald never owned the coffin, but rather gifted it to his deceased brother.

"We're looking at options for appeal from the perspective of, `Did the Baumgardners do what the court said they did?' I don't think they did," Myers said.