If you are the owner of the very popular and adorable labradoodle breed, you might be thinking that bringing this lovable pooch into your home was a great idea. But the actual man who invented the dog nearly 30 years ago calls the breed his “big regret.”

LOS ANGELES - If you are the owner of the very popular and adorable labradoodle breed, you might be thinking that bringing this lovable pooch into your home was a great idea. But the actual man who invented the dog nearly 30 years ago calls the breed his “big regret.”

Wally Conron, who worked for Guide Dogs Victoria in Australia, recently spoke on a podcast for the Australian Broadcast Corporation (ABC) where he said he was just trying to breed a new efficient type of guide dog but he ended up creating “Frankenstein's monster.”

Conron said he originally created the breed following a request from a blind woman who needed a guide dog that wouldn’t shed because her husband was allergic to dogs.

He was able to breed a litter of three puppies and sent clippings of the coat as well as saliva samples to the husband and wife in Hawaii. The couple found that only one, a puppy named Sultan, didn’t trigger the husband’s allergies.

Conron said while the other two puppies would’ve made perfectly good guide dogs, no one wanted them. He went to his company’s public relations department and asked them to inform the media that a new special breed of dog had come into existence.

He said that while no one wanted a “crossbreed,” simply coining the name “Labradoodle,” was all that was needed to get everyone talking about the new dog.

“I could not visualize the publicity that a crossbred dog would get,” Conron said. “It was on everybody’s lips.” 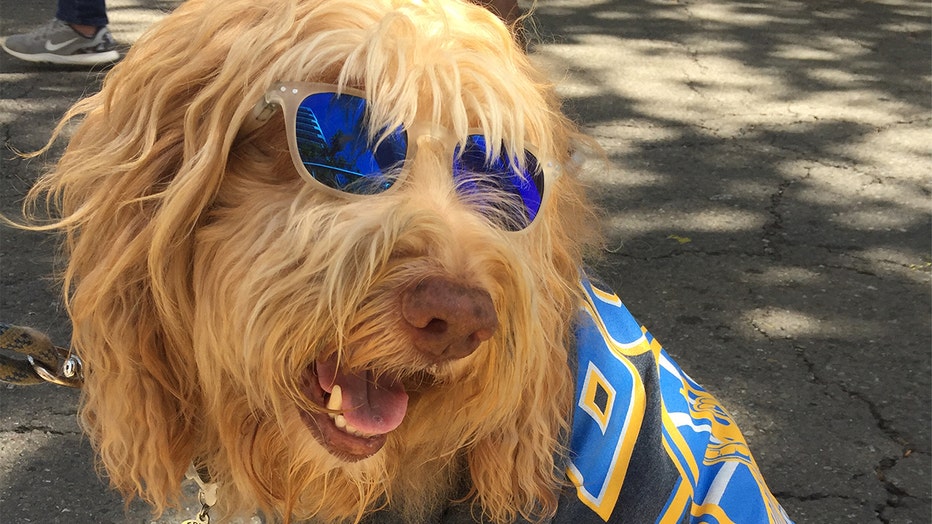 FILE - Simba, the Dubs-loving labradoodle before the start of the Warriors parade in Oakland, Calif. (Erin Baldassari/Bay Area News Group via Getty Images)

He said he merely intended on breeding a canine that would be a solid guide dog for people who struggle with allergies, but never could have foreseen what followed.

Conron said creating the labradoodle was like opening Pandora’s box. He noticed an explosion in breeding trends where people began to breed poodles with anything they could get their hands on, creating the goldendoodle, sheepaddoodle, aussiedoodle and many more.

“I realized what I had done within a matter of days,” Conron said. “I went to my boss at the time and said, ‘Look I’ve created a monster, we need to do something about it to control it.’”

They tried to create a patent for the name in hopes of preventing people from jumping on the “oodle” band wagon, but the name was not permitted to be patented, Conron said.

While labradoodles are extremely popular and designer breeds have become more widespread than ever, Conron said his creation of the breed unleashed an irresponsible trend in unethical breeding in order to create various types of dogs simply to make money.

“When I say I opened Pandora’s box and released a Frankenstein monster, I released the reason for these unethical ruthless people to breed these dogs and sell them for big bucks, that’s my big regret,” he said.

While Conron said he does see the occasional labrodoodle properly bred for its original purpose, a majority of these dogs are “either crazy or have a hereditary problem.”