EMTs in New York City say they are under stress and worried about their own protection.

NEW YORK - The strain being placed on EMTs and paramedics in New York City is being called “unprecedented,” as the number of confirmed cases and hospitalizations due to the coronavirus in the city continues to increase.

Oren Barzilay, the President of the FDNY EMS Union 2507, said the current situation in New York City is even more taxing than September 11.

During those days, EMTs and paramedics wear facemasks, gloves and thin paper garments.

“It’s extremely frustrating that we haven’t elevated to higher safety precautions,” Barzilay said. “This thing is airborne, the thing lands on us we’re taking it home.”

The FDNY released a statement to FOX 5 News saying it is following CDC guidelines and making sure crews have enough masks, eye shields, gloves, and gowns.  It says crews are never sent out without proper equipment. 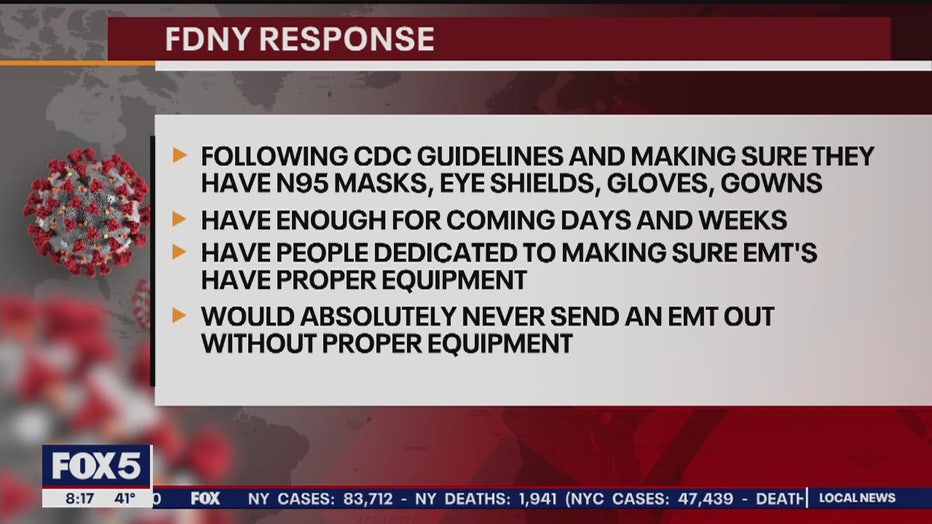 Barzilay also said he worries that the system, already stretched near to its limits, will fare in the coming weeks when the need for hospital resources reaches its projected peak.

“It’s frightening. If we’re not at the top and we’re already falling, it’s going to be a disaster,” Barzilay said.

But, despite the challenges, Barzilay says his members will continue to show up to save lives in New York City.

To help mitigate that disaster, FEMA has dispatched 250 ambulances and 500 EMTs to New York City.