A daring icy water rescue by two Irving officers got the attention and praise of U.S. Attorney General Merrick Garland.

Officers Travis Allen and Brendan Fowler were honored with a distinguished service award.

Body camera footage from 2021 shows chaos as Allen frantically tried to get the woman suffering from hypothermia out of the cold water. Officer Allen and his team were able to get her and her husband out as their children watched from the shore.

What the two Irving officers did on February 22, 2021, at Thomas Jefferson Park saved lives.

Officers Allen and Fowler revisited the frigid water rescue of a couple out on what looked like a frozen pond — until the ice gave way.

"A huge chunk of the shelf broke off and started angling down toward the deeper part," Allen recalled. "I held on to the woman and tried to scurry up the ladder, but the ladder was sliding down into the pond."

"I knew I had a rope in the back of my squad car, so I grabbed that," Fowler said.

Fowler threw a lifeline to the couple in the cold water. At the time, he was the only Irving officer who carried what’s called a throw rope bag. 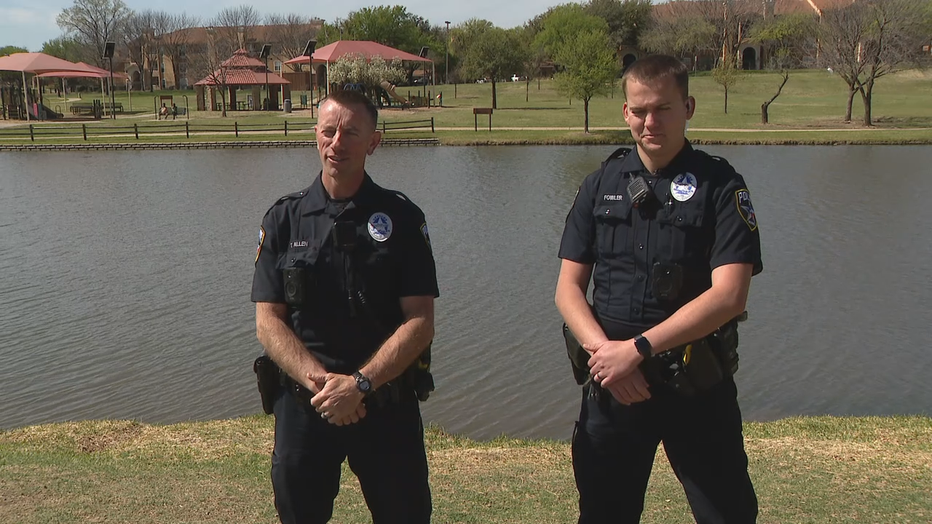 "I saw a video, I think it was from Austin, of a water rescue. I said that could be kind of helpful. We have a ton of lakes and ponds out here. I didn’t think I would actually ever use it," he said.

But the rope kept them afloat until Officer Allen, whose shift had ended, heard the call and went to help.

"We knew at any moment judging by the looks on their faces, especially the woman, they were deteriorating in their condition pretty quick," he said.

Firefighters showed up and stretched ladders over the icy pond.

The woman went under. Allen snaked down the ladder to her

"I got one of her arms over the rung of the ladder," he recalled. "That way the ladder would hold her up, and that frees up my other hand to grab a hold of his shirt if I needed to. At that point, I was this far away from her face, and I could see that she was in a bad way."

As a firefighter crawled out to assist, the ice broke.

"The ice broke to where I caught a footing on the shore, which gave me the ability to pull her," Allen said. "Turns out the ice breaking was the best thing that could have happened because that gave us a pathway to get back to the shore."

With the couple saved, the officers honored were recognized with a distinguished service award from U.S. Attorney General Merrick Garland. The men were grateful and humbled.

"I think it was neat," Fowler said. "I still think this was Travis' award. It’s nice that they let me be part of it and everything, but he's the one that went swimming in the ice water, and he's the one that deserves it."