Sixth grader Khen Hoih was born without the lower part of his left arm, but his proud teachers say he’s never let anything hold him back. So some engineering students at Irving Nimitz High School designed a prosthetic to help him out.

IRVING, Texas - Engineering students at Irving Nimitz High School are designing a prosthetic to help a middle schooler who was born without an arm play the violin.

The students have been working on this in their engineering class since November and were able to come up with a working prototype in just about a month.

Sixth grader Khen Hoih was born without the lower part of his left arm, but his proud teachers say he’s never let anything hold him back.

"My brother did orchestra and he said it might be fun for you, but you might see some problems with your hand," Hoih recalled.

[REPORTER: "Were you discouraged at all when you heard that?"]

"Not really, I still wanted to play a little," he responded.

So when he went to Lorenzo De Zavala Middle School wanting to play violin in the orchestra, his teachers went to work finding a way to help.

"Nothing has ever stood in the way of him doing this and we came to him at the beginning of the year saying if this is something you really want to do, we’re here to help you do it in whatever way we can," orchestra director Jillian Attan-Castro said.

They brought the idea to senior engineering students at nearby Nimitz High School, where the group got to work brainstorming ideas.

Through lots of trial and error that included 3D printing different pieces of the project.

"A lot of pieces broke off in the beginning, we had to definitely modify that," Nimitz High School senior Christian Erazo recalled.

Along with getting the measurements down to a hundredth of an inch.

"The 3D printer, it’d be off by a little bit and it wouldn’t fit," Erazo said. "It had to be that precise, so it did take a lot of measuring."

They also took suggestions from Hoih and came up with a workable prosthetic for a fraction of the cost. 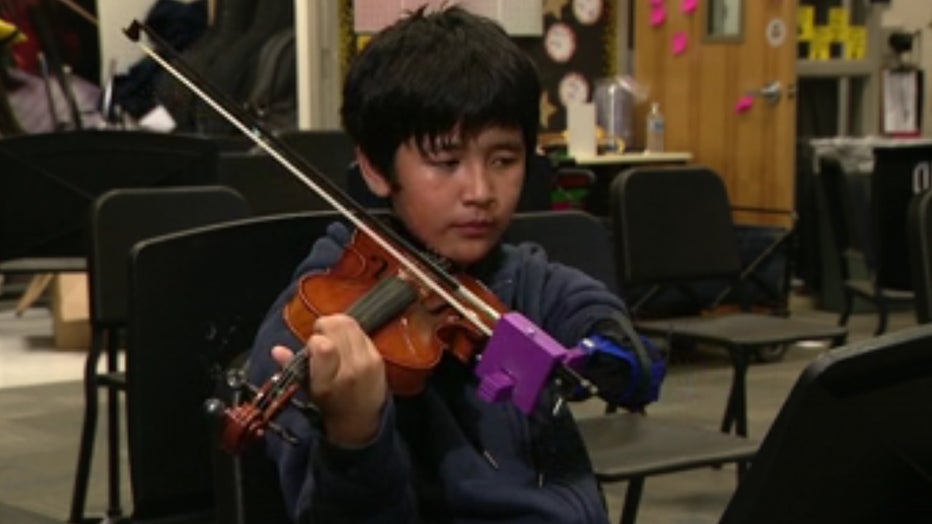 "We just kept asking, how does it feel, what do you want us to do better, how do you want it to look?" Erazo said.

"It worked really well, I was surprised," Hoih said.

It changed not only his life, but the lives of Erazo, Americo Guerrero, Julian Jimenez, and Anthony Daigle as well.

"It brought a smile to all of our faces to be able to make a kid’s dream come true despite his disability or any setbacks he may face," Erazo said.

"The one they’re helping usually benefits, but the ones who are doing the work, it benefits them tenfold more. I just see a change in it," Nimitz High School engineering teacher Dwight Davison said.

The engineering students at Nimitz are also working on a project to make prosthetics more easily accessible to others by making electronic files of these prosthetics available for others to take to a 3D printer near them and create other prosthetics.