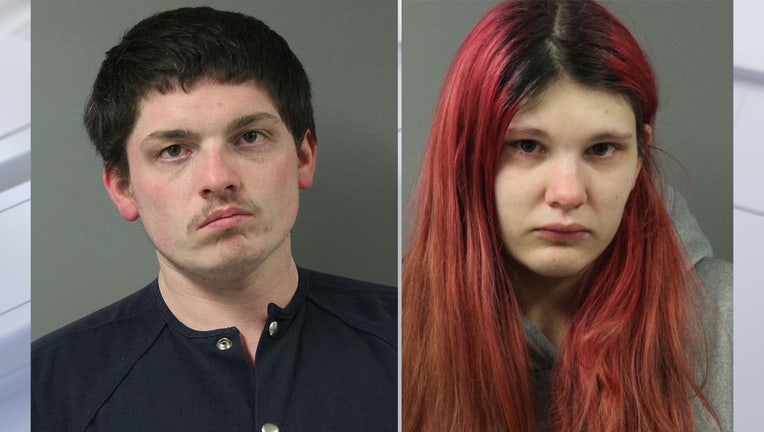 Authorities said a northern Iowa couple drowned their newborn in a bathtub shortly after she was born, fearing her cries would draw the attention of police. They're charged with first-degree murder, even though the baby's remains have not been found in weeks of searching.

Brandon D. Thoma, 31, and Taylor K. Blaha, 24, both of Fort Dodge, were charged Wednesday in the presumed death of the infant, and Thoma also was charged with a felony count of abusing a corpse, court documents show.

In an arrest affidavit, Webster County Sheriff's Detective Amy Stringer said police received a call on Nov. 22 from a caseworker who said Blaha had shown up at a Fort Dodge hospital saying she had given birth days earlier at the apartment she shared with Thoma, the father of the baby and of Blaha's 2-year-old child.

In a subsequent interview with Stringer, Blaha said she had discovered in April that she was pregnant, and that she gave birth on Nov. 16 in the apartment bathroom after Thoma gave her methamphetamine to deal with the pain, the affidavit said.

Blaha confirmed that the baby was born alive, Stringer said, and was crying, moving her arms and legs, and opening her eyes. Blaha said she and Thoma agreed to name the baby Kayleen Lee.

Blaha said they planned to give the baby to Blaha’s sister to adopt, but grew fearful her cries would draw the attention of neighbors and police, so they held the baby underwater in the bathtub until she drowned. Thoma then placed the baby's body in a plastic storage container, wrapped the container in trash bags and carried it out of the apartment in a backpack, the affidavit said.

"Thoma and Blaha have both confirmed ... that once Kayleen was born, Thoma cut the umbilical cord with a pair of scissors that was present within their apartment and shortly thereafter cut additional sections of the cord to be kept to remember the baby," Stringer wrote in the affidavit.

A search of the apartment turned up what appeared to be a piece of umbilical cord or placental remains in a dresser drawer.

Stringer said she also questioned Thoma, who admitted to drowning the baby, saying he feared police would discover meth in her system and take their 2-year-old child from them.

The affidavit said text messages between Blaha and Thoma indicate he dumped the baby's body in a wooded area, but a search there turned up nothing. Thoma also led police to an area where he said he had buried the baby, but extensive excavation also turned up nothing. Police have also searched an area landfill, but have been unable to find the remains.

Cellphones and other devices belonging to the couple showed searches for how to force a miscarriage, police said, and Blaha told the detective that she and Thoma tried unsuccessfully to cause a miscarriage, the affidavit said.

The Mason City Public Defender's office has been appointed to represent Blaha, but said Thursday that an attorney had not yet been assigned. Story County Public Defender Paul Rounds, representing Thoma, declined to comment except to say that Thoma will plead not guilty.

Both were ordered held Thursday on bonds of $1 million, with preliminary hearings set for Dec. 15.