Students are returning to class in Uvalde Tuesday for the first time since the deadly school shooting. School districts across Texas are participating in a show of support for students there.

UVALDE, Texas - The morning was still pitch black, the neighborhood quiet enough to hear a pin drop. In their living room, 10-year-old Adrianna Medina and her three siblings got ready for the first day of school.

Adrianna had known since the night before that today she would step into Flores Elementary wearing green Converse sneakers, with a heart drawn on the right toe. The same kind of shoes Maite Rodriguez, her cousin and close friend, had worn on May 24 when she was killed at Robb Elementary along with 20 others.

"I wanted to have a piece of her with me," Adrianna said.

She also wore a gray shirt that her mom, Aiko Coronado, made the night before with the words "Uvalde Strong" printed on the front. The back had a picture of Adrianna and Maite holding their school awards during the ceremony held just before the shooting. That was the last time Adrianna was with her cousin.

The morning started out like most years: rushing to get ready, some breakfast still on the dining room table and family photos on the way out the door.

But, as soon Coronado and her husband were left alone, fear and anxiety set in.

"I’m scared that it might happen again — terrified actually," Coronado said, her voice cracking as she held back tears. 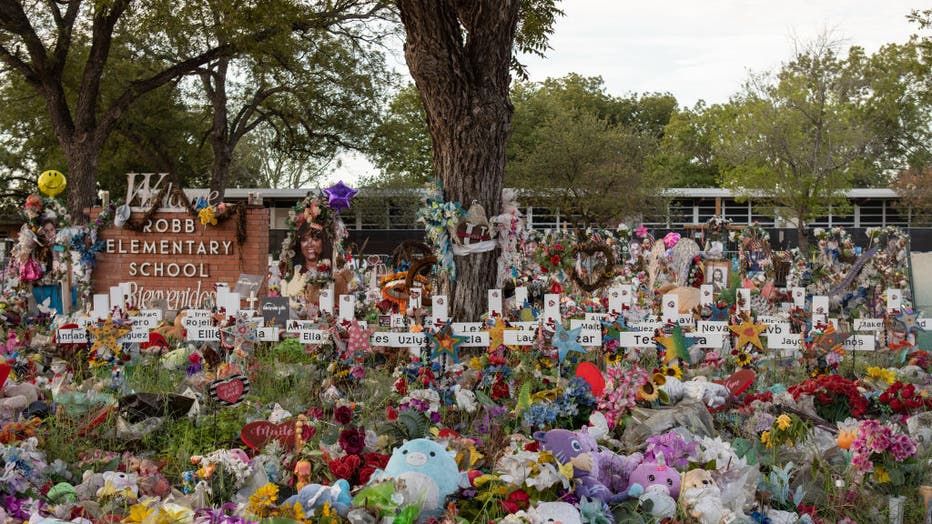 UVALDE, TEXAS, US - SEPTEMBER 06: A memorial outside of Robb Elementary School for the 21 lives taken by a gunman in Uvalde, Texas, United States on September 06, 2022. Students and parents in Uvalde began the new school year on Tuesday with heavy he

Like the Coronados, families in Uvalde sent their children to the first day of school on Tuesday morning, three months after the deadliest shooting at a Texas public school.

Parents faced the hard decision to either send their children back to Uvalde Consolidated Independent School District or look elsewhere. The Coronados tried looking elsewhere, but logistically it didn’t work. Other parents enrolled their children in the district’s online school option, which had some technical issues on the first day.

The Uvalde district delayed the start of the school year until after Labor Day to beef up security. On the first day though, only Dalton Elementary was enclosed in an unscalable fence and only Uvalde High School had a new video camera system installed, according to the school district’s latest updates.

Parents were only allowed to drop off and pick up their children at a designated location as another security measure.

The Texas Department of Public Safety had officers stationed at all eight of the district’s campuses, watching as kids were dropped off and making sure classroom doors were locked. The presence of law enforcement didn’t make Coronado feel any safer, she said, in part because they didn’t do their job on May 24. The Texas House committee report found that 376 law enforcement officers responded to the shooting, but it still took more than an hour for the gunman to be taken down.

Five DPS officers who responded to the Uvalde school shooting in May will face an investigation into their actions at Robb Elementary. The investigation will determine if the officers violated policies in their response to the shooting and if disciplinary actions are necessary.

Adrianna was in room 102 on the day of the shooting, one of the classrooms at which the gunman fired. At just 10 years old, Adrianna now knows what it’s like to fear for her life.

She cried herself to sleep the night before school resumed, Coronado said. Adrianna has struggled with anxiety, post-traumatic stress disorder and depression since the shooting. Coronado said her daughter has woken up freaking out about gunshots she’s heard from a dove hunting ground across the street.

"I didn’t even know she could have PTSD, anxiety and depression like all at once," Coronado said. "I have anxiety of my own, and I’m 31, and it’s even hard to deal with by myself. Can you imagine a 10-year-old, all of those emotions?"

Adrianna has been seeing a therapist for the last couple of months, and as they work to get past the tragic event, the therapist and the family agreed part of that process is to have her go back to school even if it means dealing with bouts of anxiety for a while.

"I feel like we made the right decision to let them go back to school," Coronado said. "We’re just trying to get back to normal."

While Coronado was making sure her kids didn’t miss the school bus, Adam Martinez, a father of two, was getting his kids — an 8-year-old and 12-year-old — ready to learn online. But it didn’t go to plan as the school had technical difficulties with launching the online school.

Instead, Martinez improvised. He gave his kids his own math and reading assignments for the day.

Online school isn’t ideal nor was it Martinez’s first choice, but when he spoke with his kids, it was clear they were still scared. When the Martinez family was making the decision on what their education would look like this year, their son was clear.

"I was telling my son, ‘There’s gonna be a tall fence, and they’re gonna have state troopers on all the locations,’" Martinez said. "And he told me, ‘Who cares if there’s cops? They’re not going to do anything anyway. They’re scared.’"

While Martinez and Coronado choose different options for their children, the end goal is the same: to one day have their children not be scared to be in a classroom.

"It’s definitely temporary," Martinez said. "Right now, they don’t even have fencing at so many schools, and so they still need to get that corrected and get it up to standards before we consider going back."

While Adrianna doesn’t have the same enthusiasm to get to school as she did a year ago, she put a brave face on, raced outside when she heard the bus and sat with her siblings.

"I would love for us to just be like ‘Yeah, happy to go to school’ instead of crying the night before," her mom said. "No kid should be scared to go back to school."

This article first appeared in the Texas Tribune. Read more at https://www.texastribune.org/2022/09/07/uvalde-first-day-of-school/