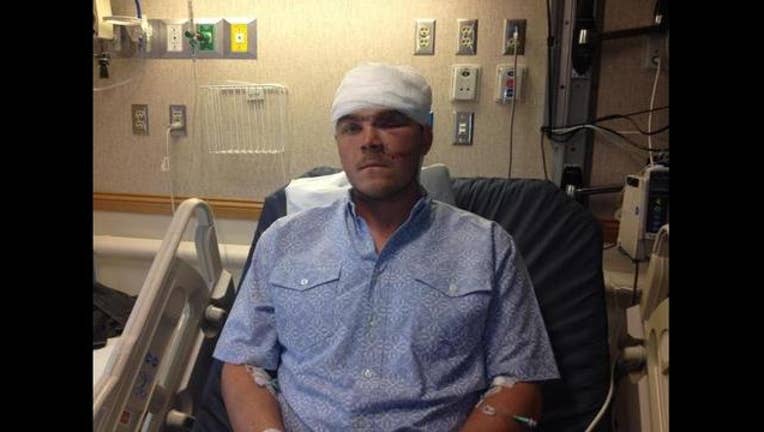 GREAT FALLS, Mont. (AP) — A Montana bow hunter is recovering after he survived a grizzly bear mauling by remembering a tip from his grandmother and shoving his arm down the animal's throat.

Chase Dellwo, 26, was hunting with his brother northwest of the town of Choteau on Saturday when he came face-to-face with a 350- to 400-pound male grizzly, the Great Falls Tribune reported (http://gftrib.com/1WGK9mk ).

Dellwo was walking up a creek bed, hoping to drive a herd of elk to a ridge where his brother was waiting.

He was only 3 feet from the bear when he noticed it. He said the grizzly had been sleeping and didn't see him coming, possibly because of the snow, rain and 30 to 40 mph winds.

Dellwo said he only had time to take a few steps back before the bear knocked him off his feet and bit his head.

"He let go, but he was still on top of me roaring the loudest roar I have ever heard," Dellwo said.

The bear then bit Dellwo's leg and shook him, tossing him in the air. As the bear came at the man again, Dellwo recalled a story he read in a magazine.

"I remembered an article that my grandmother gave me a long time ago that said large animals have bad gag reflexes," he said. "So I shoved my right arm down his throat."

The advice worked, and the bear left.

Dellwo rejoined his brother, who drove him to a hospital. Dellwo received stitches and staples in his head, some on his face, a swollen eye and deep puncture wounds on his leg.

"I want everyone to know that it wasn't the bear's fault. He was as scared as I was," Dellwo said.