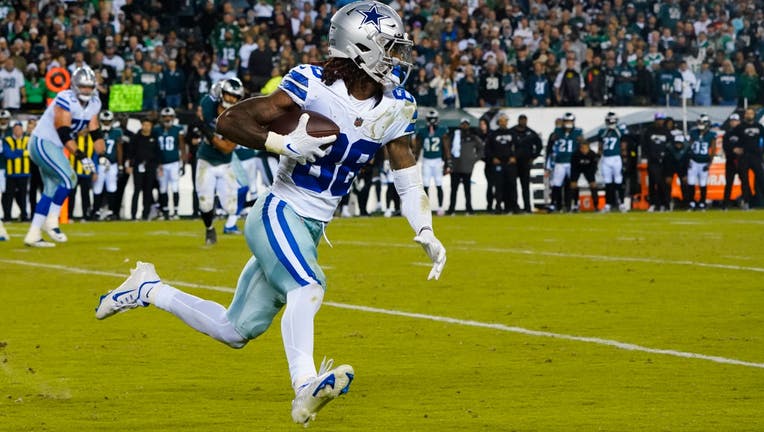 PHILADELPHIA, PA - OCTOBER 16: Dallas Cowboys Wide Receiver CeeDee Lamb (88) runs with the ball after making a catch during the second half of the National Football League game between the Dallas Cowboys and Philadelphia Eagles on October 16,2022, at

FRISCO, Texas (AP) — Dak Prescott will be "in the lead chair as far as reps" for practice in the latest sign that the star quarterback for the Dallas Cowboys will return from injury Sunday against Detroit.

Coach Mike McCarthy left little doubt about the end of Prescott’s five-game absence because of a fractured thumb on his throwing hand. The quarterback said over the weekend he expected to play.

Prescott threw 40 passes during a scaled-back practice Wednesday coming off a late game at Philadelphia.

"I thought he looked very good," McCarthy said. "We’ll look to expand that (Thursday) and put him in the lead chair as far as reps just to give him the opportunity to prepare to play."

The Cowboys (4-2) lost to the undefeated Eagles 26-17 with first place in the NFC East on the line.

Now they face the Lions (1-4), one of two one-win teams in the NFC. Dallas gets another struggling opponent at home next week against Chicago.

Dallas won four consecutive games with Cooper Rush replacing Prescott after the 2016 NFL Offensive Rookie of the Year fractured his right thumb in a season-opening loss to Tampa Bay.

The winning streak pushed Rush’s career record to 5-0, including a victory last season at Minnesota.

Although Rush no longer has a perfect record, the Cowboys are one of just four teams in the NFC with a winning record through six weeks. Three of those teams are in the NFC East.

McCarthy credited the players’ participation in the offseason program and a mostly healthy training camp in California with helping Dallas stay in contention without Prescott.

"I think it’s a credit to the whole team, especially what Cooper Rush was able to do," McCarthy said. "I think it’s all those things, they add up and then it’s all part of keeping the train on the tracks."

The Cowboys are looking to get back to their winning ways, with Dak Prescott under center.

How to watch: CBS