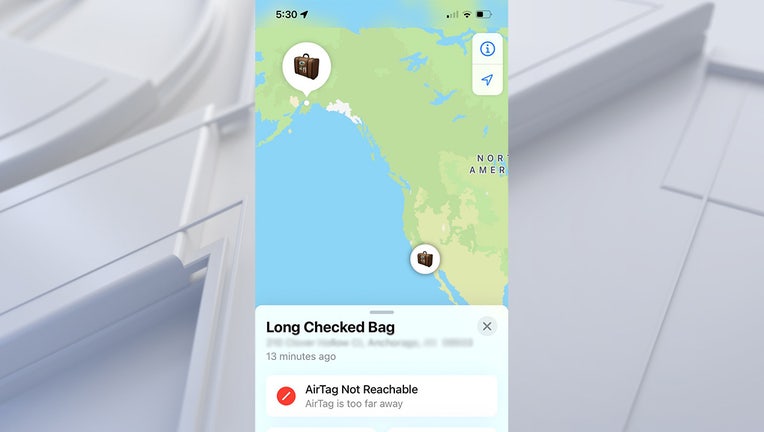 This is hardly an ad for Apple AirTag, but it could be.

Errol Webber, an Oscar-winning film producer based in Los Angeles, California, was traveling with United Airlines from Anchorage, Alaska, back to California on Oct. 29 after completing a project.

He had a layover in Denver, Colorado, and finally returned home on Oct. 30.

Once he made it back home and began to unpack, he noticed some of the items in his checked luggage were unzipped. At first, he paid it no mind and just assumed it happened by accident and went about his week.

"My long checked bag holds my light stands and tripods, and other smaller items that are dense," Webber told FOX TV Stations.

But come Monday, while prepping his camera gear for another shoot, Webber realized something was wrong.

RELATED: Apple AirTags: How the device works and why it’s raising security concerns

"I couldn’t find some items that I knew I packed in the long checked bag at my hotel in Anchorage in preparation for my trip back," he said.

While racking his brain to figure out whether he might have misplaced his equipment that had now mysteriously disappeared, it donned on him — his Apple AirTags.

Webber pulled out his iPhone and started tracking his equipment in which he had hidden four AirTags just for an occasion such as this.

He was immediately able to determine his missing equipment was nowhere near him, or even in the same state. In fact, his gear was back in Alaska, at what appeared to be someone’s home.

"I ran a Google Street View search for the address and it was a residential address many miles from the airport," Webber said.

Now, Webber knew where his equipment was and came to the conclusion that they had been taken out of his bag by an airport employee.

The estimated value of the items that were missing was a couple hundred dollars, Webber said.

"I made a Twitter post tagging United, knowing it would get their immediate attention, which it did," Webber continued.

"Hey @united, one of your employees at Anchorage Airport rummaged through my luggage and took some film equipment home with them. They inadvertently took my Apple AirTag that I had hidden," Webber’s tweet read in part.

United Airlines responded to Webber’s post within an hour. The airline apologized for the inconvenience, according to Webber, and has begun investigating how this happened.

As of this report, Webber has yet to get his equipment returned but has filed a missing items claim and is awaiting to hear back from United. According to Webber, the airline was unable to confirm whether a United employee or possibly an airport employee took any of the missing items.

Neither Webber nor United filed a police report.

FOX TV Stations has reached out to United Airlines for comment.