ATLANTA - Former presidents George W. Bush, Bill Clinton and Barack Obama were among the political and civil rights leaders who paid tribute Thursday to the late Rep. John Lewis at a memorial service in Atlanta.

Bush said he had been “privileged to see that spark up close” after working with Lewis to bring the National Museum of African American History and Culture to Washington, D.C. Bush signed a bill to establish the museum in 2003.

Lewis spent years fighting in Congress to make the museum a reality, which was ultimately opened in 2016. 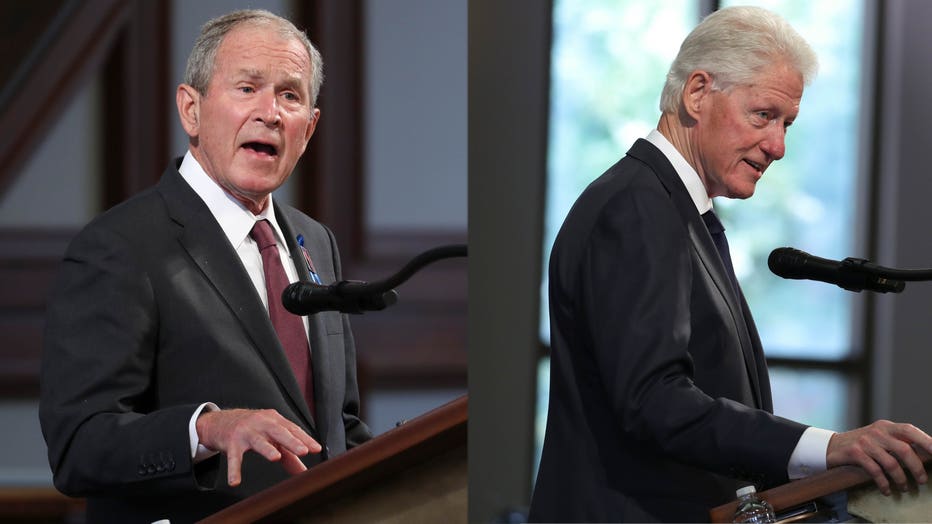 Bush said he and Lewis hadn’t always agreed on politics, but that didn’t mean they were at odds.

“In the America that John and I believe in, differences of opinion are inevitable, and evidence of democracy in action,” Bush said, prompting a strong applause from the audience.

Lewis died July 17 after a 6-month battle with pancreatic cancer. He was 80.

The location of Lewis’ funeral service, Ebenezer Baptist Church, held special significance for its place in civil rights history. Its former pastor was Dr. Martin Luther King Jr., whose sermons Lewis discovered while scanning the radio dial as a 15-year-old boy growing up in then-segregated Alabama.

Over the next 65 years, King continued to inspire Lewis in his civil rights work as he fought segregation during sometimes bloody marches, Greyhound bus “Freedom Rides" across the South and later during his long tenure in the U.S. Congress.

In 1965, Lewis was beaten by Alabama state troopers in the city of Selma in what became known as “Bloody Sunday.”

Clinton poignantly shared how Lewis carried the autobiography of Catholic monk Thomas Merton in his backpack as he marched to Selma. He said Lewis was here on a mission “bigger than personal ambition.”

“We're here today because he had the kind of character that showed when he lost an election,” Clinton said, prompting more applause.

"I suggest, since (John Lewis is) close enough to God to keep his eye on the sparrow and us, we salute, suit up, and march on," Clinton said.

Obama also joined in the eulogies, who awarded Lewis the Medal of Freedom of 2011.

“I’ve come here today because I like so many Americans owe a great debt to John Lewis and his forceful vision of freedom,” Obama said.

Lewis was “a man of pure joy and unbreakable perseverance,” Obama added.

Lewis spent more than three decades in Congress, and his district included most of Atlanta.

Shortly before he died, Lewis wrote an essay for The New York Times and asked that it be published on the day of his funeral. In the piece published Thursday, Lewis recalled the teachings of King:

“He said we are all complicit when we tolerate injustice," Lewis wrote. “He said it is not enough to say it will get better by and by. He said each of us has a moral obligation to stand up, speak up and speak out.”

“Though I may not be here with you, I urge you to answer the highest calling of your heart and stand up for what you truly believe," Lewis added. “In my life I have done all I can to demonstrate that the way of peace, the way of love and nonviolence is the more excellent way. Now it is your turn to let freedom ring.”