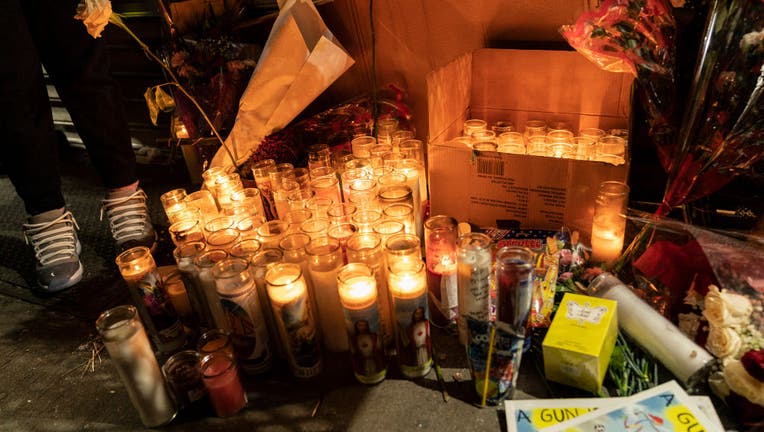 NEW YORK, UNITED STATES - 2022/01/11: Makeshift memorial on the site of senseless killing of 19-years old woman during robbery at Burger King in East Harlem. Kristal Bayron-Nieves was shot during a hold-up while working an overnight shift. Activists

A new study showed that gun-related deaths rose sharply among children and adolescents, according to an analysis of data from the U.S. Centers for Disease Control and Prevention.

A group of researchers released their data last week in the New England Journal of Medicine.

RELATED: New study offers insight into who is responsible for gun violence in DC

Researchers also said the increase was driven by homicides which also saw a 33.4% jump between 2019 and 2020 and suicides which increased by 1.1%. They said up until recently, firearm-related injuries came second to motor vehicle crashes as the leading cause of death from people between one and 19 years old.

President Joe Biden took aim at ghost guns during a speech announcing Steve Dettlebach as his nominee to run the Bureau of Alcohol, Tobacco, Firearms and Explosives. The president, who also called for assault weapons to be banned, announced new federal regulations being finalized that will come down on any manufacturer who makes the parts used for ghost gun kits.

The analysis showed drug overdoses and poisoning also increased by 83.6% from 2019 to 2020 among children and adolescents and became the third leading cause of death in that age group.

Analysts said they can’t explain why gun-related deaths rose sharply during the COVID-19 pandemic but said they can’t assume it will return to pre-pandemic levels in the future.

"Regardless, the increasing firearm-related mortality reflects a longer-term trend and shows that we continue to fail to protect our youth from a preventable cause of death," researchers said. "Generational investments are being made in the prevention of firearm violence, including new funding opportunities from the CDC and the National Institutes of Health, and funding for the prevention of community violence has been proposed in federal infrastructure legislation. This funding momentum must be maintained."