Gov. Greg Abbott visited Fort Worth Tuesday to announce a legislative plan that would freeze property tax revenue for any city that tries to defund police.

FORT WORTH, Texas - Gov. Greg Abbott visited Fort Worth Tuesday to announce a legislative plan that would freeze property tax revenue for any city that tries to defund police.

The governor made his announcement from Frot Worth because he said Fort Worth "is doing it right." He was joined by city leaders and local members of the state legislature.

“When crime is on the rise, the last thing that we should do is to defund law enforcement and yet that’s exactly what the city of Austin did,” Abbott said. “Defunding police puts residents in danger and it invites lawlessness into our communities."

Last week, Austin city leaders approved a new budget that cuts $150 million in funds from the Austin Police Department. Of that $150 million, $21 million will be immediately reinvested in EMS, domestic violence shelters and programs to address violence and homelessness. 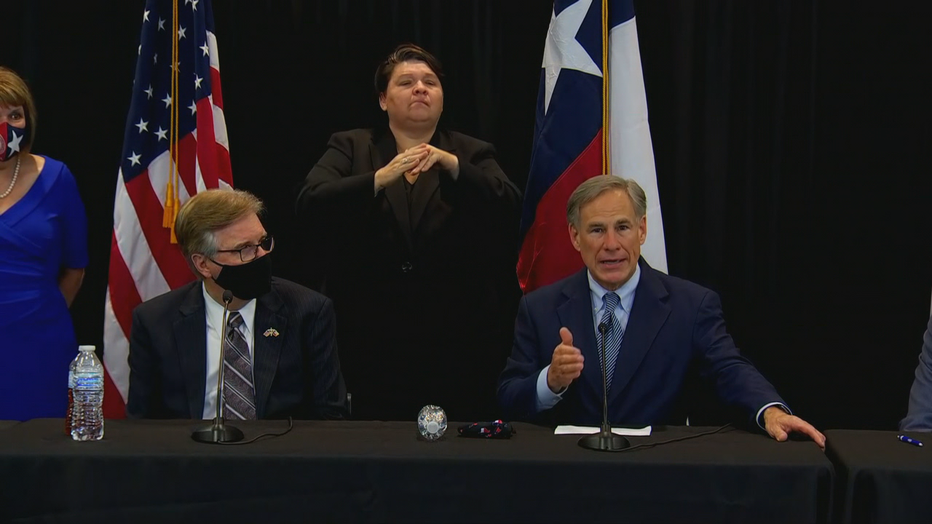 Abbott’s legislative proposal would discourage cities from doing the same by forcing them to freeze their property tax revenue at the current revenue if they do.

“They will never be able to increase property tax revenue again if they defund police,” he said. “Cities that endanger residents by reducing law enforcement should not then be able to turn around and go back and get more property tax dollars from those same residents whose lives the city just endangered.”

"What they’ve done in Austin should never happen in any city in the state and we’re gonna pass legislation to be sure that never happens again," Patrick said.

But not until questions from reporters did the governor address more specific issues that have triggered common use of the phrase “defund police.” Some of those topics include how to end police brutality that contributes to disproportionate numbers of people of color killed and how to increase police accountability.

“We do need to evaluate some use of force strategies so that strategies are not used in ways that kill someone,” Abbott said.

For example, the 2021 proposed budget includes $1.5 million in reductions to tactical operations and equipment but adds $4 million in funding for neighborhood crime prevention and school resource officers. It also creates a mental health civilian team that will potentially eliminate hundreds of calls officers typically respond to.

But Mayor Betsy Price and others made it clear the shift does not equate to defunding or a reduction in law enforcement. Instead, she called it support for the police department.

“For me and for most mayors, public safety is job one in this community. It’s not political. It’s common sense to keep your citizens safe and I’m proud to support along with our council our men and women in uniform,” Price said.

Fort Worth voters renewed a special sales tax to fund the police. It provides an additional $80 million a year to the department.

“That means that our citizens truly do want law and order and public safety,” the mayor said.

Price said she does understand the concerns in the community about relationships with the police department. However, she said the chief and his team are working on those community relations.

“We will not defund our police to solve those issues,” she said.

Community activist Cory Session, who has been closely involved in Fort Worth police reform discussions, talked briefly with Abbott away from cameras after the news conference.

“I understand the governor’s intensity, hey there’s a punishment if you defund your police. But I don’t know of any department that is actually going to pull money and just disband their police, disbanding police departments is not going to happen in any city or county,” Session said.

Texas Gov. Greg Abbott is spearheading an effort to pull property tax funds from cities that cut police budgets as Austin has. Steve Adler, the mayor of Austin, called it a political stunt and explained why the council chose to redirect funds to social services.

“It’s really a shame that some feel the way to reach people is to peddle fear, trading in fear, to avoid engaging in real policy discussion is a sickness,” Adler said.

"Today, a group of all-white members of our state government, including Governor Greg Abbott, attacked the Black Lives Matter movement. Gov. Abbott could have held a press conference to express his support for the George Floyd Act. Instead, he held a press conference to fear-monger and lie in order to distract from the fact that 10,000 Texans have now died from COVID-19," he said in part.

Casar defended the changes he and his fellow council members made on behalf of Austin's residents and pointed out the governor himself recently requested that the Department of Public Safety's budget be cut by about $50 million.

"The message from the tens of thousands of Austinites who made their voices heard in this year's budget process was clear: We must decrease our over-reliance on police to handle all of our complex public safety challenges and instead reinvest in domestic violence shelters, mental health first responders, and more. That's what our city council did - and it's exactly the work we're committed to continue," he said.

Some Texas Democratic lawmakers are pushing for police reform in the state with the George Floyd Act.

The proposal seeks to change policing as it’s known by doing away with qualified immunity, the judicial doctrine shielding government officials from liability from certain violations. It also outlines specific instances when force can be used, strictly prohibits chokeholds and ends arrests for non-jailable crimes.