The proposal calls for changes to how police respond to mental health calls as well as diverting funding from programs like SWAT to crime prevention efforts.

“This allows us to, even when we’re not getting more officers, to better use our officers,” said Chief Ed Kraus. 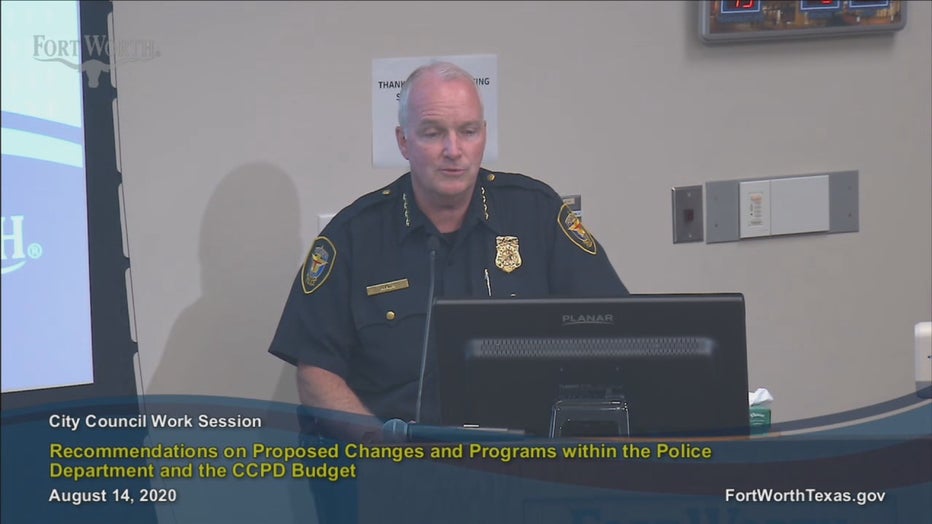 For weeks protesters in Fort Worth sounded off about police brutality, demanding changes within Fort Worth PD.

The 2021 budget plan from Kraus includes $1.5 million in reductions to tactical operations and equipment. It increases by $4 million funding for neighborhood crime prevention and also increases money for school resource officers.

Mayor Betsy Price and others made it clear the shift does not reflect recent rhetoric.

“I want people to be unequivocally clear this is not a Defunding nor a reduction,” Price said. “This is a support for our police department.”

“When someone calls 911 or the non-emergency number to discuss someone who’s having a mental crisis, we want that advisory committee to guide how we respond to that. Whether it’s something an officer has to go to or it’s something we could push off to one of the other service providers,” Kraus said.

The department is also looking to expand its connection with community outreach partners.

“I’m thankful God has allowed me to use my past to help my future,” said Rev. Rodney McIntosh, community outreach worker.

McIntosh is a former gang member committed to changing lives and squashing the violence among rival groups.

“I still talk to them in the streets so I’m actually able to take some young men from each side of Fort Worth and bring them together and literally say, OK we have to put an end to what’s going on on our side of town,” McIntosh said.

Kraus said months of evaluation went into the budget proposal and there are still considerations to make before the process is complete.