Police say two officers were alerted to a stolen vehicle. When they tried to make a traffic stop, the suspect ran off. After one officer ran out of steam during the long foot chase, a good Samaritan stepped in with an assist. "Need a ride?"

WHITE SETTLEMENT, Texas - Police in the Fort Worth suburb of White Settlement thanked a good Samaritan who helped out an officer while he was chasing a car theft suspect.

Police say two officers were alerted to a stolen vehicle. When they tried to make a traffic stop, the suspect ran off. It was a long foot chase.

One of the officers got an assist from a good Samaritan who saw them running and let one officer hitch a ride in his car.

The suspected car thief tried to get away from White Settlement police Saturday morning. Dash camera video shows him abandoning the red sedan that was reported stolen and take off running.

Two officers ran after him. And with temperatures already in the high 90s, one of them — Corporal Jon Porter — ran out of steam.

Luckily, good Samaritan Jimmy Davis came to the rescue. He says he had just seen the suspect and one of the officers run past his house. 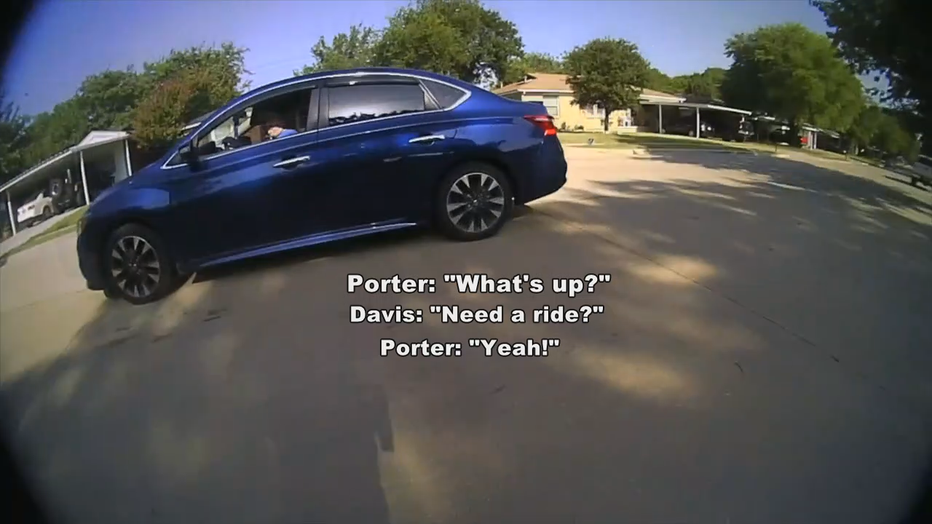 Porter hopped in. And within 20 seconds, Davis had caught up with the suspect just as Porter’s partner, Officer Samuel Brown, was handcuffing him.

"I look over my shoulder trying to see who is coming up on me, and then I see Porter jump out of the car," the officer recalled. "It was pretty funny."

Brown says he was exhausted after running for about a half mile in the heat while carrying about 25 pounds of gear.

"I wasn’t even thinking about it much until after we got back here," he said. "And I’m like, ‘Did you really get into someone else’s car?’"

Joshua Taylor Brown, 31, was arrested and charged with unauthorized use of a vehicle, possession of a stolen credit card and evading arrest.

White Settlement Police Chief Chris Cook had to turn to social media to identify that good Samaritan behind the wheel.

"If you know this guy, we would really like to get his name and thank him publicly," he said. "Because it’s not every day that someone jumps in and lends a helping hand like this."

Needless to say, they found him.

Davis says he was just following his instinct after working for years as a security guard.

"My intention was to stop the guy from going any further," he said. "I did what I had to do, and I would do it again if I had to."

Saturday’s arrest comes just four months into Brown’s tenure as an officer after being told in southern California that the job wasn’t an option for him.

But clearly, Brown isn’t letting that hold him back from living his dream.

"I was excited the whole time. I live for this kind of stuff," he said.

Police say it was a license plate camera that initially spotted the stolen car and alerted the officers.

Right now, White Settlement has two license plate cameras. But with the help of a $20,000 state grant, the city will get eight more.