A witness called police outside of a convenience store as the fourth robbery was taking place.

Police credit that call with leading them straight to the suspects.

“Yeah, it was pretty hard to lose him in the middle of the night with those red pants and that shirt on,” Brett Stokley recalled.

A stop at the Fuel Mart on Kelley Elliott Road in Arlington is part of Stokley’s weekend night routine.

“Just to pick up a Red Bull for the next day,” he said.

“When I walked out, they were hiding behind the wall. They were both wearing masks over their face. It was cold, but it wasn’t that cold,” he recalled.

Police released surveillance video that they say shows 19-year-old Braylon Cobb taking a tray of money from an employee while holding a loaded rifle. 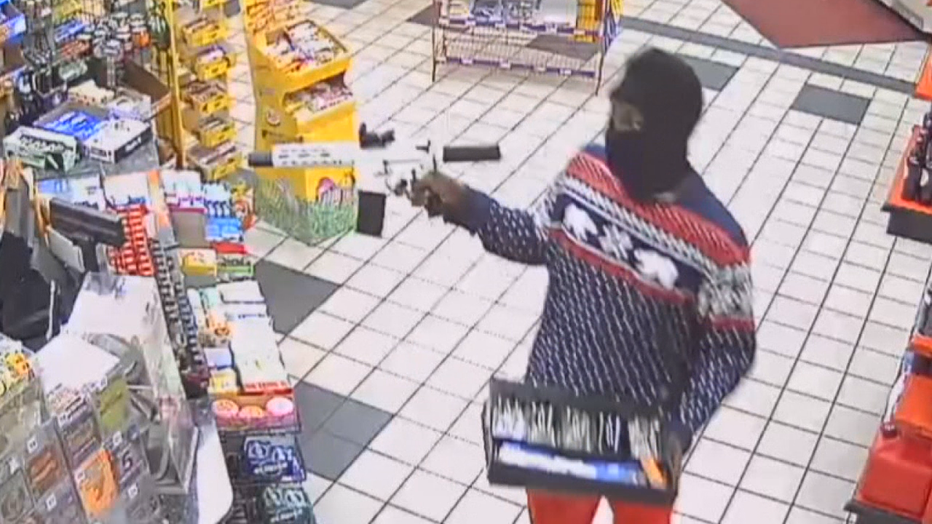 Stokley was sitting in his truck, calling police, when he saw two men running out of the store.

“They ran behind the gas station into a neighborhood, so I followed them in there,” he said.

Stokely said he trailed them for about a block, when he saw one of the men hop into a red Dodge Avenger and take off.

“I was just telling them to stop, you know. Whatever it is, it isn’t worth it. And he told me ‘I wasn’t with them, I didn’t do anything,’” Stokley said.

Stokley was still on the phone with police, when he said Cobbs tripped and fell.

Officers arrived and took him into custody.

“The citizen is the reason we responded lights and siren because they gave us good intel that, ‘Hey, I think there’s fixing to be a robbery,’” said Arlington Police Department Lt. Chris Cook.

And while police credit Stokley’s quick thinking, Cook also warns against getting too close to a criminal in the act.

“You’re dealing with some people who don’t want to go to jail and they may take an act of aggression towards you. And so we want people to be good witnesses but we don’t want to put them in harm’s way,” he said.

And while Stokley said his girlfriend wasn’t happy to hear that he followed the suspects, he told FOX4 that he stands by his actions.

“You got two choices in these situations, like my father always used to say. You will or you won’t. You can or you can’t. So in that situation I figured, I would, and I did,” Stokely said.

The two other men who took off in the Dodge Avenger were arrested later that night by Fort Worth police.

Police are checking to see if any of the three men they arrested may be linked to similar robberies Friday and Saturday night.