Former President George W. Bush spoke at an event in Dallas about the importance of the United States supporting Ukraine in its fight to maintain its democracy.

DALLAS - Former President George W. Bush talked at an event in Dallas Wednesday about the importance of the United States supporting Ukraine in its fight to maintain its democracy.

Taiwan President Tsai Ing-wen also spoke virtually to crowd gathered at the George W. Bush Institute for its event about the increasing threat of authoritarian regimes.

Bush said the Ukrainian policy for the U.S. should be clear: Support them until they win.

And as for if they can win, the former president said they absolutely can, if the free world stands by them.

"There is no bigger problem than to have a young democracy bullied by its neighbor, an autocrat," Bush said.

At an event at the Bush Institute, called The Struggle For Freedom, Bush said the United States has a duty to support.

"We recognize we can't solve all world problems, but we certainly can deal with the big ones," he said. 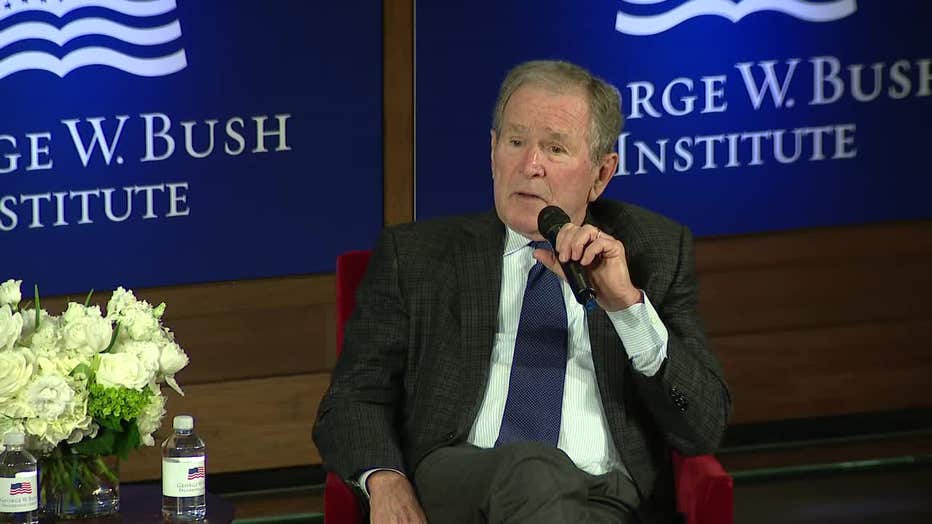 The former president said the cost to help is small, especially when considering what could happen if Ukraine falls into Russian hands.

"An unstable Europe with a tyrant on the march is going to affect our national security," he added.

And it's not just Ukraine.

President Tsai, of Taiwan, gave a virtual address as her country deals with the threat of a possible invasion from China.

"In recent years, the beautiful island we call home has been confronted by the increasingly aggressive threats from our authoritarian neighbor, the People's Republic of China," she said.

As Taiwan deals with military intimidation, cyberattacks, and attempts at economic coercion, President Tsai said they are continuing to do all they can to help Ukraine.

"As we observe Russia's illegal invasion of Ukraine from the other side of the world, Taiwan has been honored to play a role in assisting Ukraine in its struggle to defend its sovereignty and freedom. We will also work to help Ukraine reconstruct its hospitals and schools," she said. "The menacing behavior of authoritarian regimes should be a wakeup call to all democracies."

A panel of experts explained why.

"Concern authoritarians are not just oppressing those at home, they are taking their show on the road," Nicole Bibbins Sedaca said.

Damon Wilson, president and CEO of National Endowment for Democracy, said China is has exported surveillance technology to 80 authoritarian countries to help them control their citizens.

"If China should succeed in dominating the commanding heights of technology, AI Quantum computing, control of data, there will be no freedom anywhere in the world," he said.

Another reminder of how inner-connected the world is came when President Tsai said 90% of the world's semiconductor manufacturing is on the island of Taiwan.

That means, if China invades Taiwan, phones and cars that rely on those advanced chips may stop working.