The Freedom from Religion Foundation filed a complaint&nbsp;with the Texas State Commission on Judicial Conduct on Thursday, saying it was inappropriate for Kemp to give Guyger the Bible and read a passage from it.

DALLAS - The actions of the judge presiding over the Amber Guyger murder trial are now the subject of a formal complaint after she gave the convicted murderer her personal Bible.

The Freedom from Religion Foundation filed a complaint with the Texas State Commission on Judicial Conduct on Thursday, saying it was inappropriate for Kemp to give Guyger the Bible and read a passage from it.

The foundation says government employees “may not use the power and privilege of their offices to preach their personal religious beliefs.”

Judge Kemp walked over to Guyger after the week and a half-long trial concluded on Wednesday afternoon. Guyger was convicted of murder in the fatal shooting of Botham Jean and received a 10-year sentence from the jury. 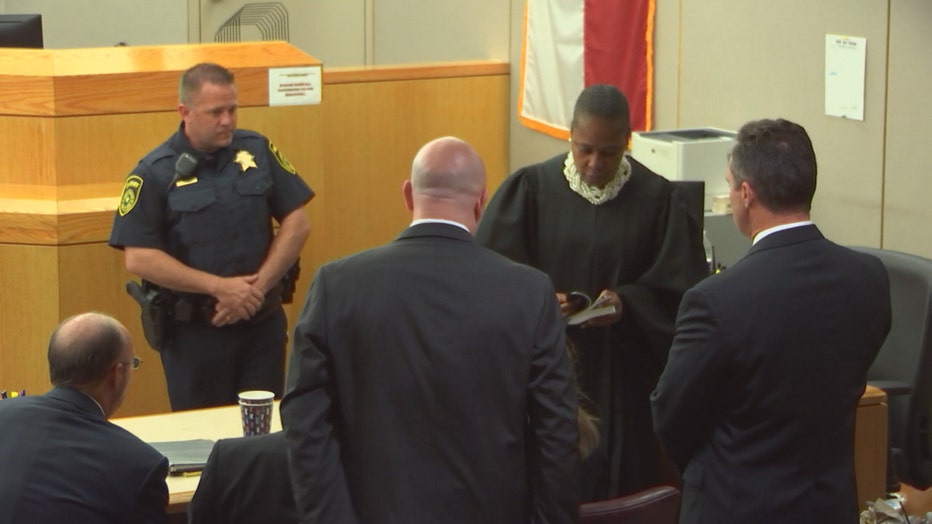 The judge came up to the defense table after first hugging and speaking with Jean’s family. She then came up to Guyger and spoke with her.

Guyger’s defense attorneys gave more context to the moment in a Thursday interview.

“The judge said you got to forgive yourself first and then they talked,” defense attorney Toby Shook said. “Amber said ‘I don’t have my Bible.’ And she said, 'I'll be right back.'”

That’s when Judge Kemp left the court, went to her chambers and returned with her personal Bible to give to Guyger.

Cameras barely capture audio of the judge reading, "For God so loved the world, that he gave his only begotten Son.” She then guided Guyger through accepting Christ into her life. It was said in court that that is what Botham Jean would have wanted.

“Per the judge's orders, we went and the judge gave us a study Bible to take to Amber,” said defense attorney Robert Rogers. “I think it's part of the judge's power and using her power — as far as the rehabilitation — and she wants Amber to have hope.”

But not everyone is embracing what the judge did.

“This was an abuse of power that was outside the bounds of propriety and the law,” Andrew L. Seidel, a constitutional attorney with the Freedom from Religion Foundation. “When a judge can use their power in their courtroom to instruct a criminal defendant to read the Bible and to come to Jesus, they have exceeded their power and they are violating everyone's religious liberty.”

The atheist organization is no stranger to Texas. They have previously filed complaints or have sued over high school cheerleaders using banners with religious messages, nativity scenes, prayer rallies and the placement of religious plaques.

“Even if Amber Guyger is a devout Bible-believing Christian, the judge's actions were still inappropriate,” Seidel said. “She was abusing a public office that belongs to we the people.”

The foundation believes that Kemp otherwise handled the Guyger trial with “grace and aplomb” but that she crossed the line with her actions.

Another group called the First Liberty Institute issued a statement against the complaint stating that the complainant is protesting rather than joining the rest of the nation celebrating compassion and mercy.

Judge Kemp has not spoken publicly since the end of the trial. A representative for Kemp declined to comment on the complaint.